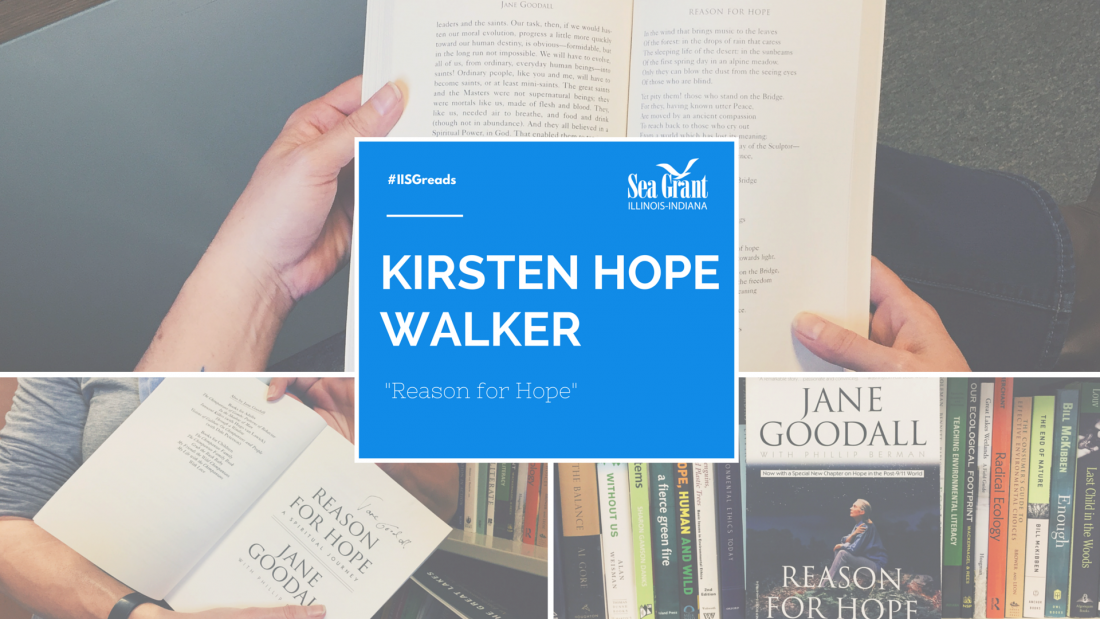 Recently, we started a new series here at Illinois-Indiana Sea Grant called #IISGreads.  In the same vein as our #iamIISG campaign, it’s our way of allowing our friends to get to know us a little better. As we said in the first post, “When we walk through the doors of our work, we don’t just leave behind who we are in that moment. Everything that has come before defines us, in small and sometimes not-so-small ways.” That still holds true today.

And it’s today that we feature our Environmental Educator Kirsten Hope Walker.

What books are currently on your nightstand?

What is one of your favorite books of all time?

Reason for Hope by Jane Goodall. The book and her adventures taught me how to be still and observe even if it’s for a long period of time. The reward is in the patience. What is it about this particular book that speaks to you?

Jane Goodall has always been my hero. I have always admired her strength and purpose. When Reason for Hope was released, I listened to the audiobook on my way to and from NIU (from Schaumburg ~1 hour). I liked that despite the problems she had being a woman in a man’s world; she excelled and exhibited patience that was needed to study the chimpanzees of Gombe. Even during the horrific events both within and outside of the troop, she maintained hope that her work would show that these beings were more than just animals. They used tools, had strong family groups, and showed emotion.

When Jane came to Chicago on March 25, 2007, I had to go and hear her speak. Although I had never asked anyone for an autograph, I knew I would be an idiot if I didn’t ask for this one. I waited (luckily) in the front of a 400 person line to get her autograph. I had to buy a book because I didn’t have the audiobook with me. What is your favorite passage from the book? Why?

The poem “Only They Can Whisper Songs of Hope”:

The world has need of them, those who stand upon the Bridge,
Who know the pain in the singing of a bird
And the beauty beyond a flower dying:
Who have heard the crystal harmony
Within the silence of a snow-peaked mountain—
For who but they can bring life’s meaning
To the living dead?

Oh, the world needs those standing on the Bridge,
For they know how Eternity reaches to earth
In the wind that brings music to the leaves
Of the forest: in the drops of rain that caress
The sleeping life of the desert: in the sunbeams
Of the first spring day in an alpine meadow.
Only they can blow the dust from the seeing eyes
Of those who are blind.

Yet pity them! those who stand on the Bridge.
For they, having known utter Peace,
Are moved by an ancient compassion
To reach back to those who cry out
From a world which has lost its meaning:
A world where the atom—the clay of the Sculptor—
Is torn apart, in the name of science,
For the destruction of Love.

And so they stand there on the Bridge
Torn by the anguish of free will:
Yearning with unshed tears
To go back—to return
To the starlight of their beginnings
To the utter peace
Of the unfleshed spirit.
Yet only they can whisper songs of hope
To those who struggle, helpless, towards light.

Oh, let them not desert us, those on the Bridge,
Those who have known Love in the freedom
Of the night sky and know the meaning
Of the moon’s existence beyond
Man’s fumbling footsteps into space.
For they know the Eternal Power
That encompasses life’s beginnings
And gathers up its endings,
And lays them, like Joseph’s coat,
On the never changing, always moving canvas
That stretches beyond the Universe
And is contained in the eye
Of a little frog. The sentence after this poem (on pages 200-202) says, “And what about those, and there are many, who do not believe in God – those who are atheists? It does not make any difference, I thought. A life lived in service of humanity, a love of and respect for all living things – those attributes are the essence of saint-like behavior.” What would you say to someone in recommending this book?

I would recommend this to someone who needs inspiration when facing difficult times or just loves what Jane Goodall does and stands for in life. When you say her name, her purpose is clear to all.

What books (or reads!) are YOUR favorite(s), or what works have impacted you the most? We would love to know! Connect with us in the comment section below or in Twitter with the hashtag #IISGreads to continue the conversation. Looking forward to seeing you there!