The federal government and many state governments and agencies have begun to increase cleanup efforts in the Great Lakes, but that is only one part of the battle. The other is to ensure that those cleanup efforts, from pollution reduction to invasive species mitigation and many more, are based on solid and up-to-the-minute scientific information.

Providing that information is the goal of a research program being established by the University of Michigan.
From Greenfield, Indiana’s Daily Reporter:

“The program has drawn praise from environmental groups, state officials and others who have long warned the Great Lakes are in danger of becoming ecological wastelands. But some of the region’s leading researchers say it should have a stronger scientific foundation to make sure it produces long-term, system-wide solutions, not just temporary fixes in particular locations.
That will be the primary goal of the new University of Michigan Water Center during its initial three-year phase, when it will be supported by grants of $4.5 million each from the university and the Frederick A. and Barbara M. Erb Family Foundation.”

Read more about the program and the research and cleanup goals at the link above.
« Previous Post
Next Post »

Lake levels continue to reach record highs or near-record highs across the basin. What problems does this cause? 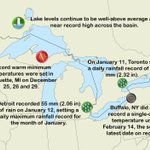