In the news: Solution to Asian carp problem may be in kitchen

From the Carmi Times:
Illinois residents know the Asian carp as an undesirable invasive species that is ruining state waterways, crowding out game fish and, occasionally, knocking out boaters by hurling their considerably large bodies out of the water.

But researchers at Southern Illinois University Carbondale who are studying the problem fish are looking into the possibility that residents might instead come to know the ugly critter by another name: “Dinner.”

Working with a $1.1 million grant they received last year, the researchers are studying the economics of turning this river menace into a cash cow. And for one day in September, the researchers will join forces with a Louisiana-based chef who believes the fish’s mild flavor is a perfect canvas on which to paint flavorful dishes. Read more.

Check out our @PurdueExtension aquaculture team with their boots on the ground at a #largemouthbass farm in Illinois! 🐟 Did you know that outdoor pond culture is only one of the systems farmers use in the Midwest to grow food fish? 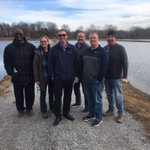