IISG staff members and interns traveled to the Indiana shoreline earlier this week to help launch an environmental sensing buoy four miles off the coast of Michigan City, Indiana. They were joined by researchers from the Purdue University 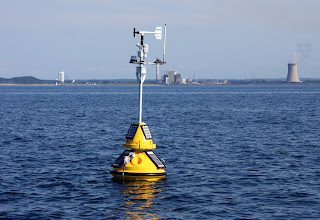 School of Civil Engineering, who partnered with IISG to develop the buoy, and staff at the Indiana DNR.

IISG Science Writer Anjanette Riley was there for the launch and recalls the day’s events:

“If I had to describe the launch process in one word, it would be ‘meticulous.’ The approximately 6-hour process was carefully divided into a series of steps: Steps for the final calibration of the real-time data sensors, steps for placing the 2,000 lb anchor on the lake bottom, steps for rigging the buoy up to be dragged behind the DNR boat to its final destination in 62-foot water, and still more steps for attaching it to the anchor’s line. To a passer-by the process must have looked a little hectic, with people running around securing lines and popping back-and-forth from the building to test light-sensitive sensors. And maybe things were a little chaotic at times, but a chaos complete with checklists.

This is not to say that the day played out without any hiccups. In fact, the whole thing almost had to be scrapped for another day because of a malfunctioning light needed to announce the buoy’s existence to nearby boaters. Cary Troy, the lead researcher on the project, had brought four of these lights from Purdue just in case one didn’t work. Four proved to be too few, though, when the time came to install it atop the buoy. We knew going in that the buoy might not be able to go out that day. There was always the chance that the weather would not be on our side that morning and we would need to wait for another, better day. But with the weather the best it had been for several days, the anchor sitting on a barge at the Port Authority ready to be carried out into the lake, and the buoy all working as planned, a small but important light stood in the way. 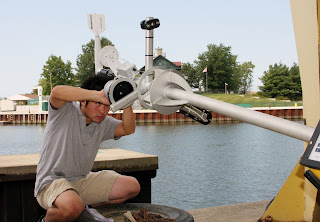 To keep the day moving, the team decided to divide and conquer. Cary Troy and graduate student Jun Choi rode the four miles out into the lake on a flat barge carrying the buoy’s anchor, hoping to at least get that in place on the scheduled day. A temporary buoy was attached to the anchor to mark the location and hold the line that secures to buoy in place until the real thing was ready.

Meanwhile, IISG’s Naoki Wada set about trying to repair the light. As a summer intern, Naoki was a key player in the buoy development and continued to lead the way during much of the launch. Step one in the repair process was to hook the light up to a car battery to charge. Once out on the lake, the light is designed to charge during the day using a series of solar panels and flash in 15-second intervals at night or when overcast. That afternoon, though, the sun was replaced with the faster-acting car battery. Step two involved making a series of alterations to the light to test why the now-charged light was not consistently functional. In the end, the launch date was saved when Naoki discovered that removing an internal screw was enough to keep the light working as designed. 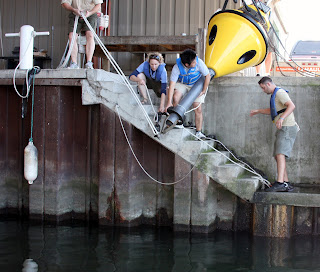 With the light finally mounted in place, IISG and crew from the Indiana DNR set about rigging the buoy to safely lower it into the water. The weight and the sensitivity of its sensors meant that the crew needed to be in constant control of the buoy’s movement from the minute it entered the water—something much easier said than done with a machine designed to float. The rigging and lowering process was perhaps the most meticulous part of the day, with as many as eight people at one point tying rope, connecting chains, checking the balance of weight, supporting the buoy into the water, and preventing it from floating under the boat as it drove away from the dock. 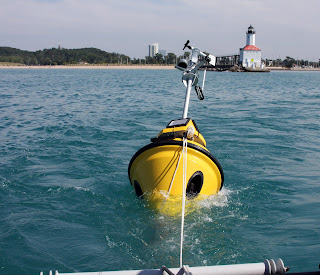 The same ropes and chains were then used to transport the buoy four miles into the lake at about 5mph, the manufacturer-recommended speed for dragging a buoy behind a boat. The last step was to remove the drag lines and attach the buoy to the anchor line put in place earlier that day in a process that looked much like the rigging of an hour earlier acted out in reverse. Months of work planning, developing, and launching the buoy were capped off by the whole launch crew snapping photos of the now-operational buoy as the DNR boat sped back to shore.”

To read more about how the buoy will support research into the weather patterns and biology of Lake Michigan and help beachgoers plan visits to Indiana’s shores, visit IISG’s news page.
Special thanks to Naoki Wada for his extensive work ensuring the buoy was operational in time for last week’s launch and overseeing the day’s events. Additional thanks to Brian Breidert, Randy Brindza, Ben Rhoda, and Jamie McNeill IV from Indiana DNR.
« Previous Post
Next Post »