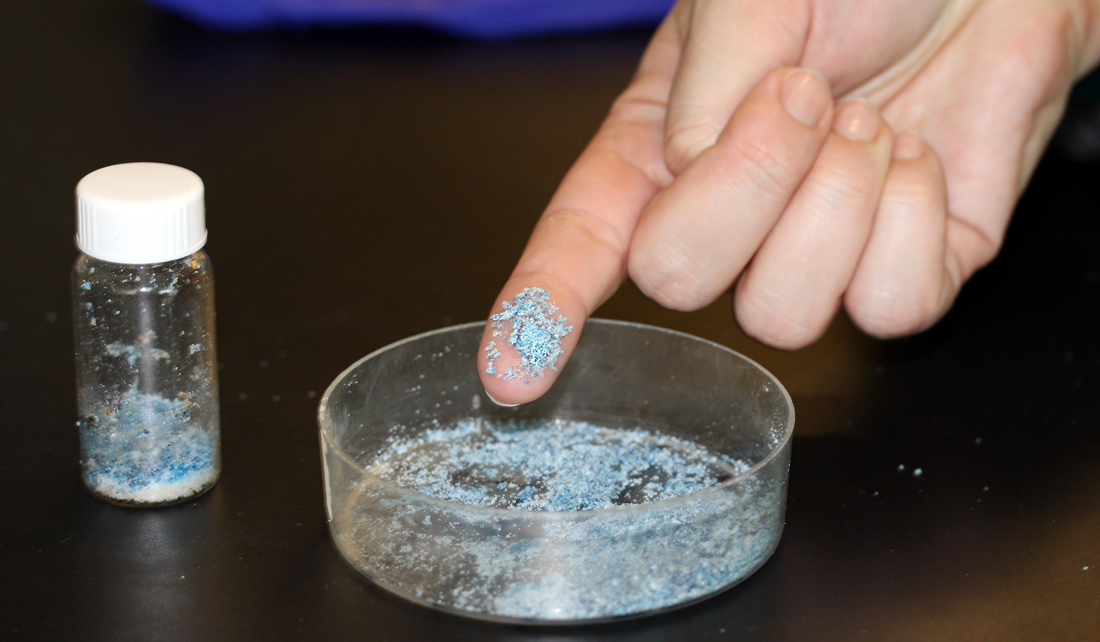 WEST LAFAYETTE, Ind. – Purdue University scientists led a comprehensive analysis of research concerning the effects of microplastics on aquatic life, with the results showing widely different impacts among different types of animals. Strong negative effects were particularly apparent for small animals, such as larval fish and zooplankton, a source of food for many species, suggesting serious potential consequences that could ripple throughout the food web.

Tomas Höök, an associate professor in Purdue University’s Department of Forestry and Natural Resources and director of the Illinois-Indiana Sea Grant College Program, led a team that designed a meta-analysis of research related to the effects of microplastics on aquatic life. The analysis, published in the journal Science of the Total Environment, used results from 43 other studies that each considered the effects of microplastics on consumption of food, growth, reproduction, and/or survival of aquatic animals. The analysis mathematically calculated one or more effect size(s) for each study, then those effects were combined statistically to understand the big-picture effect on animals. The animals included in this study were all aquatic but ranged from fish to mussels to sea urchins to worms.

The most significant findings included:

*  Considering all effect sizes together, on average, exposure to microplastics negatively affects consumption, growth and survival of aquatic animals.
*  However, the results are highly varied and not all groups of animals were affected in the same ways.
*  Microplastics significantly reduced growth, reproduction and survival of zooplankton.
*  When exposed to microplastics, larval and juvenile fish see negative effects on natural consumption of other foods.

“One of the types of organisms that seems to be affected is crustacean zooplankton, which are the main prey for many small fishes,” said Höök, whose findings were published in the journal Science of the Total Environment. “The fact that these very small organisms are consuming these microplastics, altering their growth, reproduction and survival, means there could be consequences up the food web. If zooplankton numbers decline, there may be less food available for organisms at higher trophic levels.”

Microplastics, small pieces of the material less than 5 millimeters in size, have been found in waters and soils in and around all seven continents. They come from a wide variety of sources, including broken-down food and drink containers, fibers from synthetic clothing, industrial waste and some beauty products.

Many organizations and governments have tried to reduce the amount of plastic pollution reaching water and wildlife, but the effects these microplastics are having on the range of aquatic life hasn’t been clear. Purdue’s meta-analysis puts all the current, applicable research into perspective.

Carolyn Foley, a research associate in Purdue’s Department of Natural Resources and research coordinator for Illinois-Indiana Sea Grant, said few of the studies analyzed included microplastic fibers, the small pieces of plastic that break away from larger pieces. That might be an area to focus future research. She also suggested that while the effects on upper-level functions, such as reproduction and survival, were highly variable, there isn’t a similar summary of research examining how microplastics might be altering aquatic life in less perceptible ways.

“If microplastics aren’t having immediate effects on these upper-level functions, maybe there are less-obvious and cumulative negative impacts,” said Foley, who is the lead author of the paper. “It may be more important to look at finer-level effects, including molecular-level effects.”

A video of Tomas Höök discussing the effects of microplastics on aquatic life is available at https://www.youtube.com/embed/X6rd-MdAx3A?rel=0.