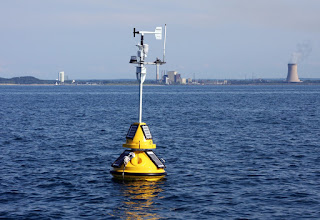 The research buoy launched off the coast of Michigan City, IN earlier this fall has been brought inland for winter, but will return to the water next spring for its first full season monitoring environmental conditions in Lake Michigan’s nearshore waters.

It has been less than two months since the buoy began feeding real-time data to the IISG website. In that short time, though, the data has been used by scientists, anglers, and boaters alike to better predict weather conditions, target where to fish, and identify the safest times to be out on the lake. Many of these users have reached out to IISG with feedback on the buoy and the website.
“We have heard from so many different groups of people, from recreational paddlers to research scientists, and the response has been overwhelmingly positive,” said Carolyn Foley, IISG assistant research coordinator. “People are grateful to have data for an area that was previously not being monitored.” 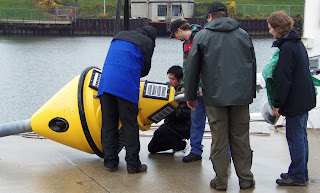 More than 500 people have visited the website since it went live in early September to see real-time snapshots of lake conditions or to examine trends shown over 24-hour and 5-day periods. IISG staff members have heard from sailors, kayakers, anglers, and local residents who say they plan to regularly use the information collected on wave height, water temperatures, and wind speed before venturing from shore. Sailors from Indianapolis told IISG that the up-to-date information on lake conditions will help them more safely make their seasonal trip from St. Joseph, MI to Michigan City. The same data will also be used by fisheries researchers at the Purdue University West Lafayette campus to determine when to make the two-hour drive up to the lake for sampling trips.

The collected data has also been used by researchers to improve models used to predict weather and current changes. For example, the National Weather Service (NWS) office in Northern Indiana was able to adjust its forecast for wave heights by several feet in mid-October based on the real-time data from the buoy. Engineers from other federal agencies have also requested data to use in models designed to examine the movement of water and heat in lower Lake Michigan. 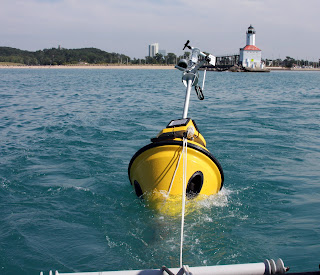 The buoy’s launch also attracted regional press coverage that continued well after it was placed in the water. Indiana TV and newspapers were joined by news outlets from Illinois and Michigan—including the Detroit Free Press—in their coverage. The launch was also featured in trade blogs such as the Environmental Monitor and recreational forums like the Great Lakes Angler Forum.

Although real-time data will not be available while the buoy is in winter storage, an archive of the information collected from early September to late October of this year will be released in the coming months. Visit www.iiseagrant.org/buoy for more information.
« Previous Post
Next Post »