Posted June 4th, 2013 in Water Supply
IISG’s science writer, Anjanette Riley, is at the 2013 International Association for Great Lakes Research conference at Purdue University. She’ll be blogging from the sessions all week providing an inside look at the newest research on the health of the Great Lakes. Here’s today’s post:

“It was during a presentation today on the impacts of climate change to water levels that I learned a startling fact: Lake Erie’s water level trends have in essence made a 180 degree turn. Historically, water levels in the Great Lakes are at their highest in summer when increased rain and stormwater runoff add more water to the lakes than they lose to evaporation, and levels are lowest in the winter months. In recent decades, though, this trend has been reversing, leaving water levels higher in January than they are in June.
According to data collected by the Great Lakes Environmental Research Lab (GLERL), one of the biggest driving forces behind this shift is increased evaporation over the lake during the hot summer months.
Evaporation is also a primary culprit in Lake Superior’s falling water levels. Here, though, warmer water temperatures that mean less ice in winter are causing greater evaporation across seasons. And less water is entering the lake from rain and stormwater runoff.
The story is different still in Lakes Michigan and Huron, where water levels reached an all-time low in the 1990s and have largely stayed there since.
Of course, there is still some variation in water levels year over year. The water in Lake Erie, in fact, rose by almost 3 feet over the course of just four months in 2011. But these jumps, as the presentation attendees were told, appear to be the exception to the rule. In these three lakes, water levels are trending down.”
« Previous Post
Next Post »

Dr. Sundeep Inti of @ISUSciTech, his students, & @PurdueNorthwest partners were able to do some research as planned, even during the pandemic. They collected runoff from parking lots to test the permeability of new concrete materials. #SeaGrantFunded 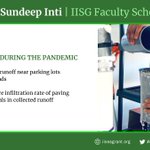