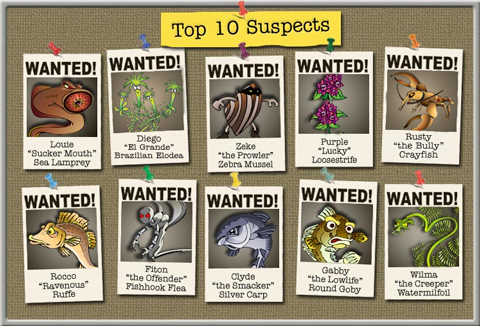 Nab the Aquatic Invader!, an educational web site about aquatic invasive species (AIS), will be featured at the Smithsonian National Museum of Natural History as part of the Ocean Today Kiosk in the Sant Ocean Hall. It will also be on display at Coastal Ecosystem Learning Centers throughout the country.

The web site was created by Illinois-Indiana Sea Grant (IISG), which is part of University of Illinois Extension, along with Sea Grant programs in New York, Louisiana, Connecticut, and Oregon to provide the latest information about AIS through colorful characters and a crime-solving theme. Since its inception, the project has expanded to include species from coastal regions around the country.

“In addition to being clever and fun, the site is rich with curriculum for teachers, ideas for stewardship projects, and creative educational activities for students and other online audiences,” said Robin Goettel, IISG associate director for education.

The Ocean Today Kiosk, developed by NOAA in partnership with the Smithsonian Institution , presents news, video stories and in this case, interactive pages that highlight some of the most interesting, surprising, and pressing issues facing our ocean today. Through a large touch-screen interface, kiosk visitors are offered a variety of information about ocean life, current science and technology, and recent discoveries. The kiosk also features a ‘current news’ section, presenting users with near real-time data about ocean and weather conditions around the U.S.

The Nab the Aquatic Invader! feature will focus on the suspects–aka the invasive species–in four regions of the country: Atlantic, Pacific, Gulf, and Great Lakes. In each region, visitors can see read interrogation interviews with the 10 Most Wanted AIS and learn their origin, problems they cause, and some control methods used to slow the spread of these species.

“The Ocean Today Kiosk team is excited to partner with Illinois-Indiana Sea Grant to turn content from the Nab the Aquatic Invader web site into an interactive feature,” said Katie Snider, kiosk executive producer at NOAA’s National Ocean Service. “The Ocean Today Kiosk was designed to educate the public on fundamental ocean literacy concepts. There’s no better way to teach kids (and big kids!) about invasive species than by letting them “touch screen” their way through the crimes and profiles of invasive “suspects” around the country.”