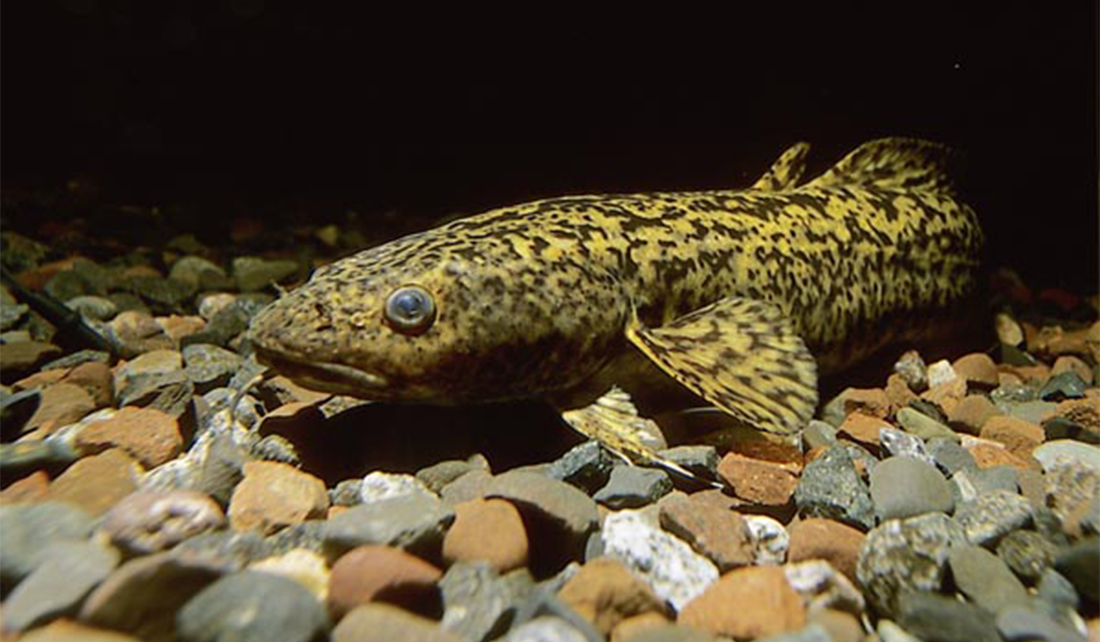 The only member of the cod family to live solely in freshwater, the burbot is commonly described as a cross between a catfish and an eel. This benthic beast gets its name from the single whisker-like barbel hanging under its mouth.

But the burbot is known by many other names depending on where you go—like “the lawyer,” “lush,” “mud blower,”  “eelpout,” and “poor man’s lobster,” to mention a few. Such diverse calling cards are not surprising. The burbot can be found all over the globe north of the 40th parallel, ranging from the United Kingdom to Asia, across northern Europe, as well as North America.

In the United States, populations span from Alaska to Delaware, in all the Great Lake basins, and as far south as Missouri and Kansas. It can be found primarily in deep and cold waters of almost any substrate—silt, mud, gravel, rubble, you name it. During winter it will migrate to shallower depths, (and brackish waters for some populations) to spawn underneath the ice. This is one of the strongest factors connecting the burbot to saltwater cod, which also spawns in winter.

The fins of the burbot are relatively small, indicative of a low tolerance to strong currents. This poses no issue in terms of predation, however, as its yellow-brown color and dark mottling act as a kind of camouflage, enabling it to ambush prey. A juvenile burbot eats mainly small crustaceans like water fleas and zooplankton, but as it matures, its diet becomes more adventurous and the burbot feasts almost solely on other fish, like northern pike, yellow perch, walleye, and trout. Some of those fish rival the burbot in size, and, as with the northern pike and some lamprey, also act as predators. This pescatarian proclivity combined with the burbot’s habit of eating fish eggs can make it a nuisance species in non-native waters.

Because of their voracious appetite, burbot are relatively easy to catch. Anglers will have the best chance of hooking one during the evening or at night, when burbot are most active. (During the day they will remain near the bottom of the waterbody to keep cool in rising water temperatures.) If caught, burbot has been known wrap around and cling to the body holding it—its small embedded scales making the burbot smooth and slimy to the touch.

When cooked, burbot can taste similar to American lobster (thus the nickname), and their liver and roe are considered delicacies in Finland. Even the liver itself presents something of a peculiarity, being about six times as large as the livers of other freshwater fish of similar size. It was once used as an alternative to cod liver oil, having about eight times the potency of vitamin D and vitamin A. This discovery was made some time in the 1920s, when Theodore H. Rowell, a druggist and conservationist, found that the pelts of the foxes he raised increased in quality after feeding them burbot.

Populations of burbot are difficult to study and manage due to the fact that they spawn under ice, and their small scales makes determining their age challenging.

Although some populations of  burbot have been threatened or made extinct by pollution, invasive species, and damming, currently the burbot is listed by the International Union for Conservation of Nature (IUCN) as a species of least concern, with management being a low priority in most regions.