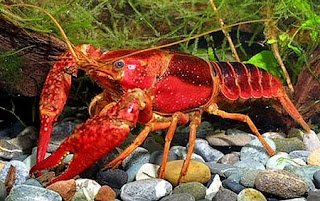 INVASIVE SPECIES EDITION—Where we take a moment to explore the species that threaten the Great Lakes region. 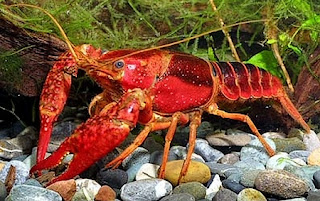 The most widely introduced crayfish in the world, this crustacean is a jack of all trades, a species used by humans more than any we’ve covered so far. The red swamp crayfish is present on every continent but Australia and Antarctica, and it has a role in everything from research and education to fishing bait–even acting as a biological control in Africa to eliminate snails that are key to the life cycle of schistomiasis, a disease that can cause liver damage, infertility, and bladder cancer. However it is probably most well known as a dish, served on plates the world over, with almost 50,000 tons harvested each year in the U.S. alone.

But for all their use, red swamp crayfish still represent a threat to many ecosystems. Native to the warm still waters of the southeastern United States, they have been found as far northwest as Washington, and have established populations up and down the east and west coasts, as well as Illinois, Indiana, and Ohio. Commonly sold in pet stores, some of the spread can be contributed to careless release from private aquariums. But to the red swamp crayfishs’ credit, they are perfectly capable of spreading themselves, crossing miles of dry land from waterbody to waterbody, especially during wet seasons. And once they’ve established themselves, they’re almost impossible to eradicate.

A true survivor, the red swamp crayfish will dig chimney-like burrows into stream beds to cope with changing water levels, and be able to live in them for up to four months. Unlike most crayfish which are herbivores, it has been known to eat the eggs of fish and other crustaceans as well as snails, tadpoles, and small fish and amphibians in addition to plants. It can tolerate slightly brackish water,(another trait not shared with many other crayfish) and can grow quickly in small amounts of water – up to about five inches long and weighing up to 50 grams. All these attributes combine to make an animal that out-competes native crayfish, and causes stream-bank erosion by loosening up sediment with its burrows, resulting in higher turbidity and destroyed crustacean and insect nesting beds.

Currently there are no prescribed methods to remove red swamp crayfish from invaded waterbodies. In many states they are illegal to transport, and people are encouraged to report any sightings.