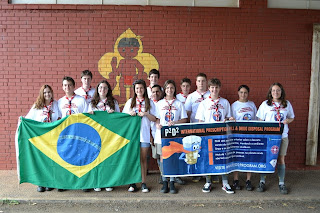 The National Prescription Pill and Drug Disposal program (P2D2) has had a great deal of success lately.  After placing third in the international Volvo Adventure Award competition, the program partnered with the second place winners of the Volvo competition to start a P2D2 program in Erechim, Brazil. The P2D2 program began in 2008 as a collaborative effort between local pharmacies, law enforcement agencies, officials, and Pontiac Township High School students in Paul Ritter’s Ecology class and Eric Bohm’s Illinois Studies class.
The P2D2 program’s mission is to educate the public about the harm done to the environment due to current drug disposal practices and to provide communities with an alternative disposal approach that ensures the quality of water for future generations. Their good idea has quickly caught on; the P2D2 program is now available in more than 54 counties in Illinois, 21 other states, and now goes international with the addition of the Brazil P2D2 program coordinated by Paul Hubner.
« Previous Post
Next Post »