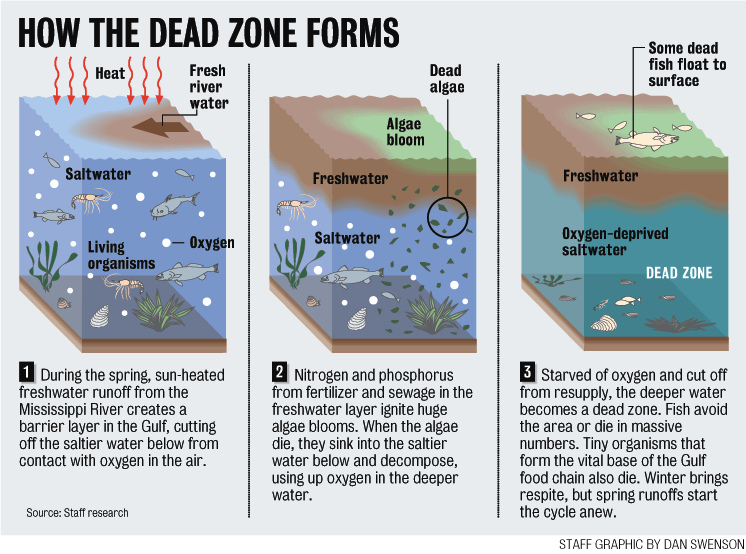 March 3rd, 2014 by iisg_superadmin
Illinois-Indiana Sea Grant’s Tomas Höök, associate director for research, was part of a team of researchers involved in a comprehensive study on Lake Erie’s health and measures needed to protect it.
From Phys.org:

“The report from the multi-institution EcoFore-Lake Erie project states that a 46 percent reduction in the amount, or load, of phosphorus pollution would be needed to shrink Lake Erie’s Central Basin hypoxic zone to a size last seen in the mid-1990s—a time that coincided with the recovery of several recreational and commercial fisheries in the lake’s west and central basins.
Phosphorus is a nutrient used in crop fertilizers. Excess phosphorus washes off croplands during rainstorms and flows downstream in rivers that feed the Great Lakes. Once in the lakes, phosphorus can trigger algae blooms. When the algae die and sink to the lake bottom, oxygen-consuming bacteria feed on them and create hypoxic zones in the process. Many fish shun these oxygen-starved waters, which significantly reduce the amount of suitable habitat available to the fish.
The study, accepted for publication in a forthcoming edition of the Journal of Great Lakes Research, calls for Central Basin phosphorus reductions considerably higher than other recent recommendations, including a proposal issued last year by the Ohio Lake Erie Phosphorus Task Force aimed at avoiding Western Basin toxic algae blooms. The new report is a synthesis of the major findings from the EcoFore-Lake Erie project, created in 2005 and supported by the U.S. National Oceanic and Atmospheric Administration’s Center for Sponsored Coastal Ocean Research.”