September 21st, 2015 by iisg_superadmin
Honors and AP high school students from Howard County, Ind. got their feet really wet Thursday at the 2015 Wildcat Experience at Wildcat Creek near Kokomo.
The program was started by Howard County Stormwater Technician Sarah Brichford with important goals for these high achievers.
Wildcat Creek is 84 miles long and a major tributary of the Wabash River. In 2003, a study showed that most of its pollutants are from urban and rural run-off and wastewater discharge. Since then, state and local governments have taken steps to stem the flow of contaminants.

Plus, they decided to bring youth into the picture. 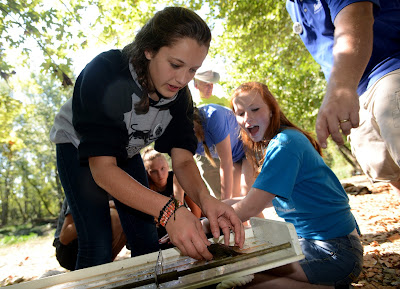 “We wanted to get high school students who are taking biology and environmental sciences out into the community so they could see some local natural resources, and more importantly, some of the services and infrastructure that depend on the natural environment like wastewater, drinking water, and stormwater treatment,” Brichford said.
“That’s why we created this, so they could experience it live and in person.”
Six years and hundreds of students later, Wildcat Experience is thriving and educating students with the help of volunteers and IISG specialists.
Jay Beugly, an IISG aquatic ecologist, shared his expertise on the region’s fish and aquatic insects. He was also hoping to change a few minds about the pollution stigma the Wildcat carries to this day.
“Typically students that come to this don’t get in the water initially because they think it’s so polluted,” Beugly said. “But I hope they go home and tell family that it has a lot of good fish and insects that don’t occur in terrible streams. I hope that they’ll decide that Wildcat Creek is a lot better than they initially thought.”

So after fish, water, macroinvertebrate, and soil testing some of the students felt differently about the creek right in their backyard.

“There’s a lot more diversity than you would think there would be in Indiana,” senior Sarah Schwarzkopf said.
“I always thought the Wildcat was really dirty, but after all the tests we did it’s really not that bad.”