When clearing out the foliage from an aquarium or backyard water garden this fall, keep water hyacinth and other invasive plants out of streams, rivers, and other waterways.

Water hyacinth has been described as “the world’s worst aquatic weed,” lovely in the garden, but a nuisance in the river, according to Andy Casper, director of the Illinois River Biological Station of the Illinois Natural History Survey (INHS), Prairie Research Institute, University of Illinois.  At this time of year, the plant can be spread easily.

“Water hyacinth is the aquatic version of kudzu,” Casper said.  “It grows faster than any other plant competing with it, quickly taking over a pond or river-bed.”

As the plant spreads out over a water surface, it blocks the sun, so native plants can’t survive.  Fish that once hid amongst the underwater plants to hunt for their prey and young fish that hide from predators experience a changed habitat.

Additionally, in the fall as the water hyacinth dies, it sinks to the river bottom, decomposes, taking the oxygen out of the water in the process.  Too little oxygen can lead to large fish kills in the winter when oxygen is naturally in short supply.

Deliberately dumping water hyacinth plants in the waterways will cause the plant to spread, as well as composting plants too close to a river, stream, or drainage ditch. Backyard flooding can also cause the invasive plant to spread into nearby surface water areas.

In one case in which plants spread, an individual composted water hyacinth plants on a pile at the edge of a yard located close to the river.  The result was a big pile of water hyacinth down river, Casper said.

“All it takes is one good growing season, and the plants take over,” he said.

In a survey of the entire Illinois River from Hennepin, Illinois to Joliet, Illinois by airplane and boat, INHS staff discovered 15 individual water hyacinth beds in the river. In addition, fish surveys also showed that whole water hyacinth seeds were present in the digestive tracts of carp, indicating a threat of dispersal of the seeds to other areas. Seeds were present in 27 percent of the digestive tracts of the common carp examined, regardless of their proximity to water hyacinth beds.

For proper disposal of water hyacinth, place plants in a plastic garbage bag and throw them away. Keep all plant parts away from waterbodies because the seeds are tiny and can be missed by the naked eye.

Water hyacinth is an economically important plant for the water gardening industry.  For this reason, the sale of water hyacinth has not yet been prohibited by the State of Illinois, as the debate continues on whether it survives a cold winter, according to Pat Charlebois, INHS aquatic ecologist.  Many states, and the City of Chicago have prohibited the sale of this plant.

Water hyacinth is just one of many invasive aquatic plants that should not be discarded in waterways.  Hydrilla, a formerly common aquarium plant, is another plant that carries a financial toll when it spreads uncontrolled.  Plants such as these clog waterways, impeding boat navigation.  With government cleanup, millions of dollars may be spent, and recreational areas may be closed, reducing recreation-based incomes.

“Hydrilla is such an aggressive plant and spreads so quickly that it can take years to completely remove it in lakes and rivers,” Charlebois said.  “Because of this, the State of Illinois has an early detection and rapid response plan in place in case hydrilla shows up in an area.”

Charlebois and colleague Greg Hitzroth, INHS outreach specialist, are seeking to change the behavior of people who purchase and use plants for outdoor water gardens and indoor aquariums, encouraging them to dispose of all aquatic plants in sealed plastic bags in the trash.  Consumers can find a list of Illinois’ invasive plants at TakeAim.org. The State of Illinois regulates some plants, but others, which are not regulated, can be just as much of a nuisance.

Consumers often look to retailers for advice on which plants to purchase and how to care for and dispose of them.

“We partner with retailers, educating them not only on which species should not be sold, but also giving them alternatives,” Hitzroth said.  “We have had success with this effort because most retailers want to do the right thing.”

There’s a loophole in these efforts, though.

“A huge market for aquatic plants is offered for sale online, which can be difficult to regulate,” Charlebois said.  “This is a sticky wicket because retailers in another state may not know which plants cannot be sold or shipped to customers in Illinois.”

Charlebois and Hitzroth have been working with wholesalers, retailers, scientists, hobbyists, consumers, and others and attending hobbyists’ tradeshows to create outreach material that aims to prevent the spread of aquatic invaders in trade.

They also worked on a statewide campaign about invasive species.  Part of that effort is the Release Zero campaign, which aims to provide suggested alternatives to release plants based on published guidelines for teachers and water garden hobbyists from the Aquatic Nuisance Species Task Force.

More information about aquatic invaders in the market place (AIM) can be found at TakeAIM.org. Alternatives to the release of aquatics in trade can be found at ReleaseZero.org.

Water gardeners—keep your eyes open this season for invasive plants that may be lurking at your neighborhood garden store. In recent years, Illinois and Indiana DNR have both added nearly 30 new species to their lists of banned aquatic plants, but some may still be available for sale.

If you spot one of these invaders, be sure to tell the store manager. Some species can be hard to identify and larger stores may not even know these plants are on their shipment list. That’s exactly what was happening at a Petco in Carbondale, IL, where Karla Gage found Brazilian elodea—aka Egeria densa—while browsing with her family. 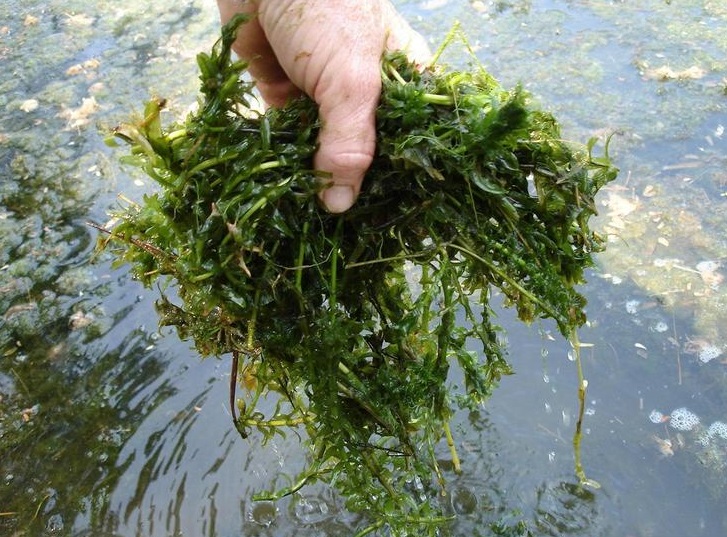 “I notified the department manager that this was listed as an injurious species in Illinois, and I sent a follow up email to the store manager,” said Karla, coordinator of the River to River Cooperative Weed Management Area, which brings together federal, state, local, and private partners to tackle invasive plants in southern Illinois. “I received a call from the corporate contact, who stated that Petco stores in Illinois would no longer receive or be able to order Brazilian elodea. Previously, Carbondale stock had been on “auto-replenish,” so the stores never actually ordered Brazilian elodea. Current stock is being disposed of responsibly.”

“Thanks to Admin Code 805 and the quick response of Petco,” she added, “the risk of an introduction of Brazilian elodea into natural systems has been reduced.”

The Illinois and Indiana rules also make it illegal to gift, barter, exchange, loan, or transport the any listed species. Recent additions to the list—27 plant species in Illinois and 28 in Indiana—were chosen based on the results of a risk assessment tool developed in Indiana by the Aquatic Plant Working Group. The tool evaluates species based on factors like ability to thrive in the Great Lakes and difficulty to control. IISG’s aquatic invasive species (AIS) team organized and facilitated the group, which included representatives from the aquatic plant industry, aquarium and water garden hobbyists, state agencies, academia, and non-governmental organizations.

Visit our AIS page for more information about invasive plants and animals on the market and what water gardeners and aquarium hobbyists can do to prevent their spread.

August 27th, 2013 by Irene Miles
Visitors to Jens Jensen Park in the Chicago suburb of Highland Park will notice a change to the landscape this year. The Fountain of the Blue Heron, nestled between the park’s grassy land and thick forestry, has been transformed into a water garden. But this is no ordinary water garden. Like much of the park surrounding it, this garden was built with plants that are native to northeastern Illinois.
The fountain was redesigned by the Park District of Highland Park and the Chicago Botanic Garden, with funding assistance from Illinois-Indiana Sea Grant, to give park visitors a closer look at how native aquatic plants like lizard’s tail, water willow, and sweet flag can be used to create beautiful, healthy water gardens.
“Native plantings have gotten a bit of a bad rap,” said Bob Kirschner, director of restoration ecology at the Chicago Botanic Garden. “They are often seen as weedy and unorganized. We wanted to demonstrate how you can use native aquatic plants to achieve the ornamental look many people desire.” 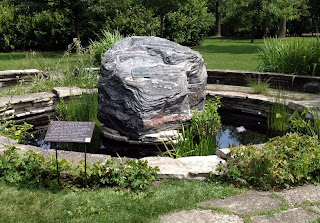 Using native aquatic plants like those in Jens Jensen Park is about more than just creating striking water gardens, though. Growing native species also helps curb the spread of invasive aquatic plants that outcompete native species and upset food webs. Invasive species common in water gardens are already threatening the health of Illinois waterways. For example, the fast-growing Brazilian Elodea—typically sold in aquarium stores and water nurseries under the name “Anacharis”—has been found in several lakes and ponds in Illinois, including in a community not far from Highland Park. Like many invasive plants, this waterweed grows in dense mats that block out sunlight needed by other species and hinders water recreation. And it is nearly impossible to remove once it has been introduced.

“Once an invasive species has become established, the negative impacts on the environment cannot be fully reversed,” said Greg Hitzroth, an IISG aquatic invasive species outreach specialist. “By growing non-invasive species, gardeners can help prevent a new population of harmful species from taking root in local environments.”
The over one dozen species of aquatic plants at home in Jens Jensen Park will also provide food for birds, insects, and other wildlife. Native plants are especially important for pollinators like bees and butterflies that keep northeastern Illinois’ natural areas flowering.
Visit IISG’s Aquatic Plants in Trade website to learn more about aquatic invasive plants and read this water gardening brochure to learn how you can help curb the spread. 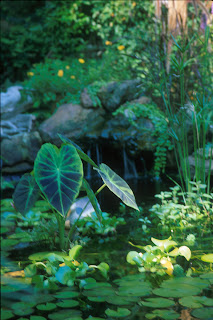