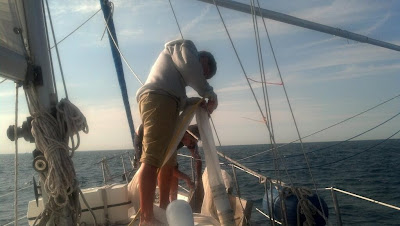 As you read in yesterday’s blog post, IISG’s Laura Kammin and Anjanette Riley are taking part in a research trip on Lake Michigan this weekend investigating the presence and concentration of microplastic pollution in the Great Lakes.

The Chicago Tribune has more details about the research:

“Calling the lake ‘its own separate little beast,’ Mason said she expects to find high levels of microplastics in Lake Michigan because it borders so many large cities and because water molecules are estimated to swirl around the lake for about 99 years on average before being replaced by water flowing in. Water stays longer only in Lake Superior, according to the National Oceanic and Atmospheric Administration.
On Friday the researchers boarded the Niagara at St. Ignace, Mich., and sailed from Lake Huron into Lake Michigan. After a stop in Milwaukee, the ship is scheduled to arrive in Chicago on Wednesday afternoon. Along the way, researchers planned to collect almost 30 samples.
One scientist who sailed on last summer’s research trip is back in her lab, studying the chemicals that may be piggybacking on the microplastics gathered from Superior, Huron and Erie.
The particles ‘work like a sponge’ for pollutants, said Lorena Rios Mendoza, an assistant professor of chemistry at the University of Wisconsin at Superior. One reason is that microplastics have a large surface area in relation to their size, which means there are plenty of places for the chemicals to stick.”

🚨 Be careful around piers! 🚨