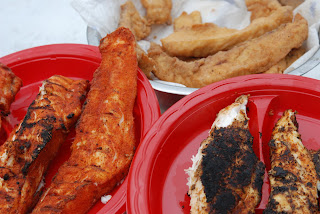 Last September, experts and stakeholders met to discuss ways to reduce Asian carp numbers by marketing the fish. In the months that followed, many who attended have been working hard to make the proposed solutions a reality.

At the marketing summit, which was organized by Illinois-Indiana Sea Grant (IISG), participants agreed that high-value Asian carp fillets marketed to restaurants and retailers may provide the financial incentive for extensive harvesting of these fish. Looking to have immediate impact, they also recommended that whole fish be exported in high numbers to Asian markets, where these species are already popular food fish. Finally, they recommended converting Asian carp by-products into pet food or treats to eliminate waste and maximize profit opportunities.

The Illinois Department of Natural Resources (IDNR) is now developing programs to help further the goals laid out during the summit. Tom Heavisides, IDNR contaminants assessment manager, said the organization is starting three pilot programs for this fall. They include an Asian carp food-handling training program, as well as another that will study marketing the invasive species. IDNR will also support researchers who will go to a pool of the Illinois River and study how pulling out Asian carp will ecologically affect the waters. All three projects are expected to be wrapped up by December.

The summit also provided opportunities to move new projects or plans forward. For example, Louisiana Sea Grant Fisheries Specialist Julie Anderson had been developing a plan with Operation Blessing, a non-profit organization, to send canned Asian carp to Haiti, where food is certainly needed and canned fish is preferred.

“At this point, we have been trying to pursue finding a company that is interested in doing the canning operation,” Anderson said.

The idea of marketing Asian carp has also received significant media exposure since the summit. For example, the New York Times recently published the article “Answer for Invasive Species: Put It on a Plate and Eat It.” However, this idea is not without controversy. IISG Aquatic Invasives Coordinator Pat Charlebois said some Great Lakes states are concerned about the idea of marketing Asian carp, but she believes there may not be any other options in the case of the Mississippi and Illinois rivers.

“The only other way to do this, I believe, is to harvest these fish and leave them on a shore or landfill to rot,” she said. “But that’s such a waste and all that harvesting is an expensive proposition.”

Charlebois said some are afraid that people will begin transplanting the species to other areas if there is a market for them, which would only intensify the problem.

“One of the reasons common carp were introduced here was because Europeans wanted food fish that they were familiar with,” Charlebois said. “It is historically a way these species have been spread. But I think there are ways we can reduce that risk.”

Ron Brooks, the fisheries division director for Kentucky Department of Fish and Wildlife Resources, has been diligently working on the Asian Carp issue for years, even before the invasive species was making big headlines. He said he is hoping to shift focus away from the Great Lakes to the states of the lower basin.

“Our message is pretty simple: If you don’t control the Asian carp numbers down here, you are never going to keep them out of the Great Lakes,” Brooks said. “If we don’t do something to crop off the spread of Asian carp, they are going to keep spreading. That is what they do; they stay in an area until they run out of food and then move on.”

However, Brooks added that funding right now is the major roadblock, but he hopes the summit will inspire people to get out and work on the problem.

“The meeting got all the stakeholders together to talk about this issue. It gave a good perspective from all sides,” he said. “But the commercial fishermen and the managers are out there every day, and they know something has to be done right now.”

The two-day summit took place at the Lewis and Clark Community College in Godfrey, Illinois, with sponsorship from the Illinois Department of Natural Resources and the National Great Rivers Research and Education Center.