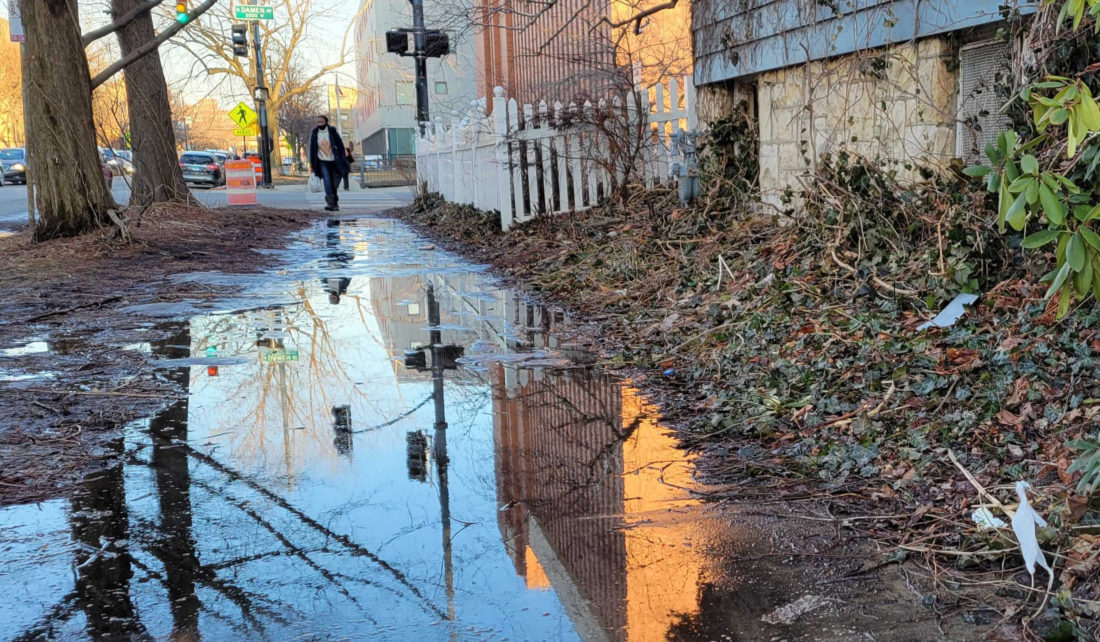 The research and outreach team set out to incorporate information about local soils as well as other factors in planning and designing GSI sites.

Mary Pat McGuire in the U of I Department of Landscape Architecture led this multidisciplinary research project, adding to her knowledge and skills with those of geologists, water resources engineers, and a community outreach specialist. With this range of expertise, and students contributing throughout, the project encompassed research, modeling, design and engagement.

“At the beginning of the process, we had to learn to communicate with each other because we brought different professional languages to the table,” said David Grimley, a Quaternary geologist at the Illinois State Geological Survey (ISGS). “By the end, we all got the bigger picture—we all learned from the experience.”

The team focused their efforts in the Calumet region, which encompasses the southeast side of Chicago along with nearby suburbs. This flat, low-lying area has historically been particularly prone to flooding. Add to that, long-standing, traditional infrastructure is aging and is frequently in need of repair or upgrading. Many communities in the Calumet region, as well as elsewhere, do not have the financial resources to update their sewer systems, which at best, may still be insufficient.

Green stormwater infrastructure offers a nature-based way to enhance traditional or “grey” infrastructure. The idea of GSI is to increase opportunities for rainfall to be absorbed where it lands, whether into a well-placed rain garden or even onto permeable pavement, instead of running off parking lots, streets and sidewalks and into sewer systems, potentially overwhelming them. 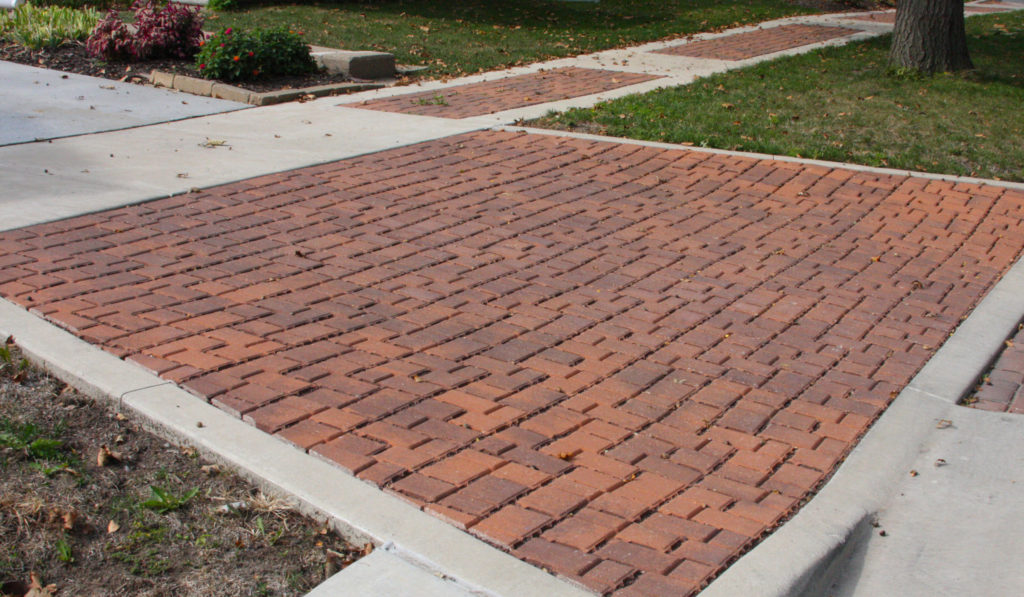 But GSI doesn’t always work as well as it might. Rain gardens are sometimes too small or are placed convenient for human activities, but not ideal for drainage. McGuire, however, thinks that effective GSI needs to be considered from a more wholistic perspective—about reconnecting to the land and retrofitting neighborhoods for water.

“We might solve urban stormwater problems by looking back at the pre-urban landscape—what was there before the city was there,” she explained. “Tracing those patterns back, we can try to find stormwater design solutions that don’t just perform like checking off boxes but actually start to reconnect with the natural history of the site.”

Understanding natural history and planning effective GSI includes studying subsoils, which sit under the topsoil and have been there for many millennia.

Pilot projects began to take shape in two Calumet region municipalities, Calumet City and Midlothian. “We chose communities that we felt would be receptive to the research—these communities were at a place in their process where they wanted to learn more about the science and it would likely inform their green infrastructure planning,” said Margaret Schneemann, Illinois-Indiana Sea Grant water resource specialist.

McGuire and Schneemann worked closely with local officials to discuss potential sites for installing GSI to reduce flooding as well as enhance the neighborhoods.

Meanwhile, ISGS Quaternary geologist Andrew Phillips, along with Grimley and several students, set out to fill in data gaps in these two communities in terms of soils—both at and below the surface. Their work built on earlier soil mapping overseen by state and federal agencies.

“Some data from previous surveys was old or incomplete,” said Phillips. “By doing field tests at six sites in both Calumet City and Midlothian we were able to update information in these two locations to be more accurate and more site specific.” 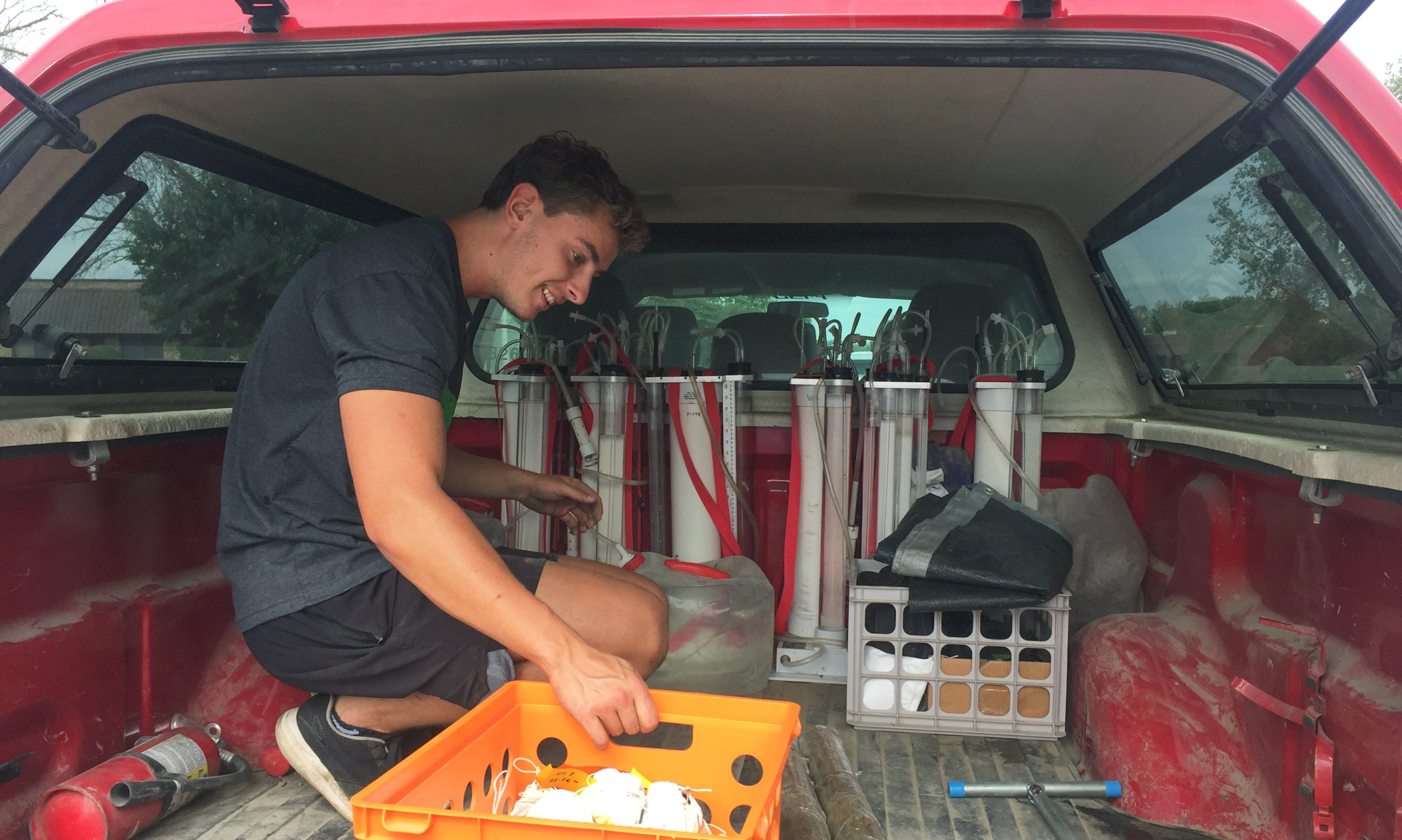 For planning GSI, the key soil characteristic is how water moves through it. For example, sandy soils, which have relatively large particles, will allow rainfall to pass through much quicker than smaller, denser clay particles that absorb water. To gather this data, the soil team used a device called an Amoozemeter, which measures soil saturated hydraulic conductivity, or how quickly water passes through.

In terms of understanding soil types and distribution, it helps to take a page from a geologist’s mindset, which is tuned into a long view of history. The geologic parent materials for Midlothian subsoils were likely formed during and just after the time when glaciers moved through the region, creating and shaping Lake Michigan—about 20,000 years ago.

These soils tend to be fine grained but are quite variable, not just from site to site, but in terms of depth, sometimes changing back and forth from sand to clay as you dig down. 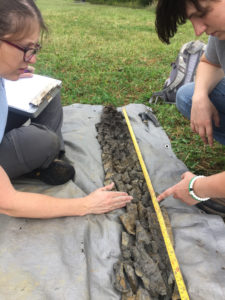 “As the glacier retreated, melting water running off the ice into the lake added complexity to what eventually became the Midlothian soil parent material,” said Grimley.

Calumet City soils are much younger—more like 5,000 years old. By then, the glaciers were gone and what would one day be the south suburb provided beachfront along Lake Michigan’s southern shore. There, the soil is sandy. Like Midlothian, other parts of the city have clay soils.

“In both Midlothian and Calumet City we found that there was a lot of variability in the soil profiles, and we found that location matters—you need data for your particular site,” said Grimley.

Assessing the impact of soil variability on GSI effectiveness was part of the task of the team’s modelers in the Department of Civil and Environmental Engineering. Ashlynn Stillwell, a U of I water resource engineer, and Reshmina William, a graduate research assistant, brought the project back to the present, while incorporating the updated knowledge of local soils.

“We were primarily working to answer the question of how green infrastructure relates to the history of a place through its soils as well as present conditions—what’s on the surface, including the human presence through development over time,” said Stillwell.

From a hydrology and hydraulics perspective, they were interested in understanding how GSI functions in response to different land surface conditions and to different rainfall conditions. But what defines whether green infrastructure is working well? What are reasonable expectations in terms of reducing runoff and flooding? Through the modeling process, the researchers set their rate of success.

“In our simulation, we used an 80% runoff reduction standard, which is higher than where most policies are currently set,” said Stillwell. “We found that for a lot of situations, we can achieve that. We can design good infrastructure that’s highly functional—we can have stringent policies and actually achieve them in many of these locations.”

One important factor in whether green infrastructure is successful is its size—a bigger surface area is usually better, especially if subsoils are denser. Another is how much of the land upstream of the GSI is hard surfaces, leading to more runoff flowing toward the rain garden or permeable pavement, perhaps overtaxing it.

“The most effective green infrastructure is distributed throughout a watershed rather than having all the rainfall collected and sent to one big detention basin at the end,” said Stillwell. “End-of-pipe solutions are more likely to fail and more likely to have continued localized flooding challenges than green infrastructure distributed in space.”

Stillwell and William’s modeling evaluation tools were later applied to the project designs for Calumet City and Midlothian.

McGuire led the process of designing GSI plans for two 250-acre neighborhoods, recruiting her students to take them on as semester-long projects.

“It’s critical that we involve our students directly in our design research so that they take interdisciplinary, engaged research with them into professional practice,” said McGuire. “In this project, our geology, landscape architecture, and engineering students were involved in every aspect of our work and contributed immensely to the research and outcomes.”

Divided into two groups, the students focused on one of the two communities. For both, the plans were designed for public land in residential areas—in Midlothian, the Jolly Homes neighborhood, and in Calumet City, the Yates neighborhood.

The GSI plan for Calumet City, titled “Before the City, there was the Sand,” won a 2019 American Society of Landscape Architects Honor Award in the Student Collaboration category.

The students had visited regional nature preserves as well as the Yates neighborhood for inspiration as they looked for ways to reconnect residents with the forgotten dune and swale landscape.

In their project description, the students proposed to “. . . create places for water that ameliorate the pattern of street and basement flooding through a new pattern of green infrastructure inspired and informed by the distribution of sandy sediments underneath the city.”

Their design replaces many hard, compacted surfaces with permeable pavement, rain gardens and trees on streets, alleys, vacant land, parking lots, a public park and at an elementary school.

The students for both teams joined McGuire and Schneemann to present their green infrastructure designs to the two communities at public meetings. Calumet City officials were particularly enthusiastic.

The design plans sparked a lot of discussion in terms of possibilities, according to Schneemann. “There was a really positive reception and an aspiration to know what to do next. The designs really sparked a lot of momentum.”

“Through their research, the students created great ideas and used a variety of plants,” said Val Williams, Calumet City Director of Economic Development. “It was amazing just how much water could actually be stored and slowly released, right on site.” 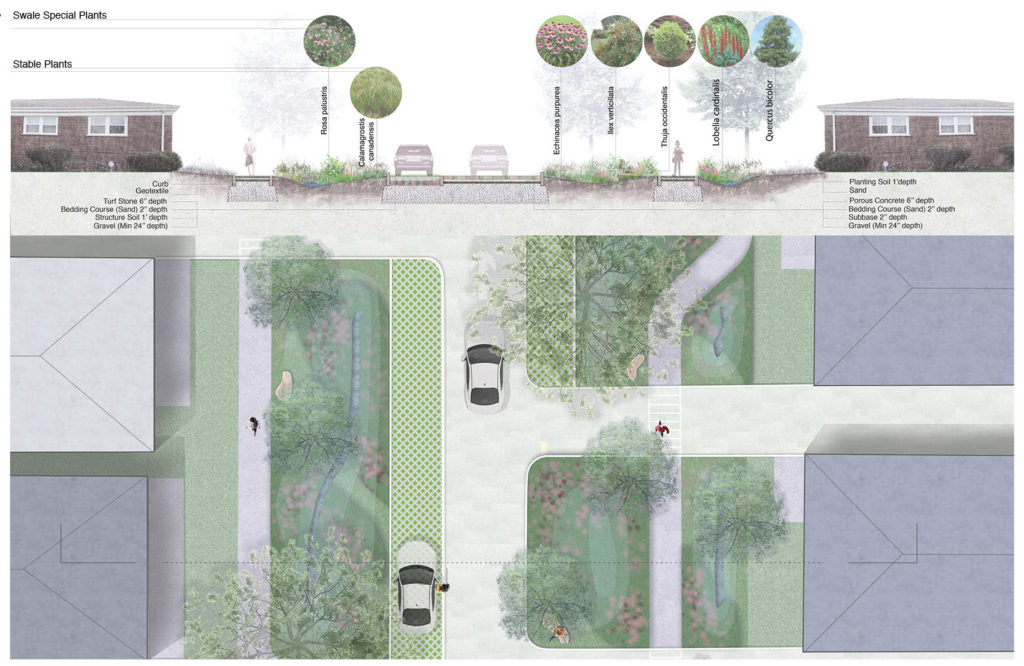 The design for Calumet City used a variety of plant species on public land in the Yates neighborhood.

Calumet City officials continue to seek funding opportunities to implement the GSI design plan, and in the meantime have started a pilot Green Alleys project through the Metropolitan Water Reclamation District of Greater Chicago’s Green Infrastructure Program. The largest of the four pilot sites, where alleys will be redeveloped to better absorb rainwater, is in the Yates neighborhood.

This success in moving forward is, in part, due to the U of I research that inspired Calumet City to dig deep and learn more about what’s underground—specifically, mapping the city’s sewer system. The city was incorporated in 1893, making it one of the oldest communities in the region, and its infrastructure was laid not long after that.

“The city is doing a new sewer assessment and inventory of what’s there and what’s been installed and is trying to get all the sewer atlases up to date in the GIS database,” said Matthew Buerger, a Calumet City engineering consultant.

The thinking is that flooding problems can be addressed from several angles. Now that the city knows that much of the soils are well-draining, understanding the status of the sewer system is another piece in the puzzle. By installing green infrastructure where it can do the most good and upgrading and cleaning out sewers where necessary, Calumet City can efficiently and affordably manage stormwater.

The data from the soil survey has also proven to help open doors for more opportunities.

“The University of Illinois study was great because it showed that the soils throughout the entirety of Calumet City are very conducive for green infrastructure to work,” said Bueger.

The data has been a valuable resource in securing around $15 million in grant money from a variety of sources. While the focus of these grant projects runs the gamut, addressing flooding and green infrastructure are always a component.

This research was recently published in Environmental Research: Infrastructure and Sustainability.