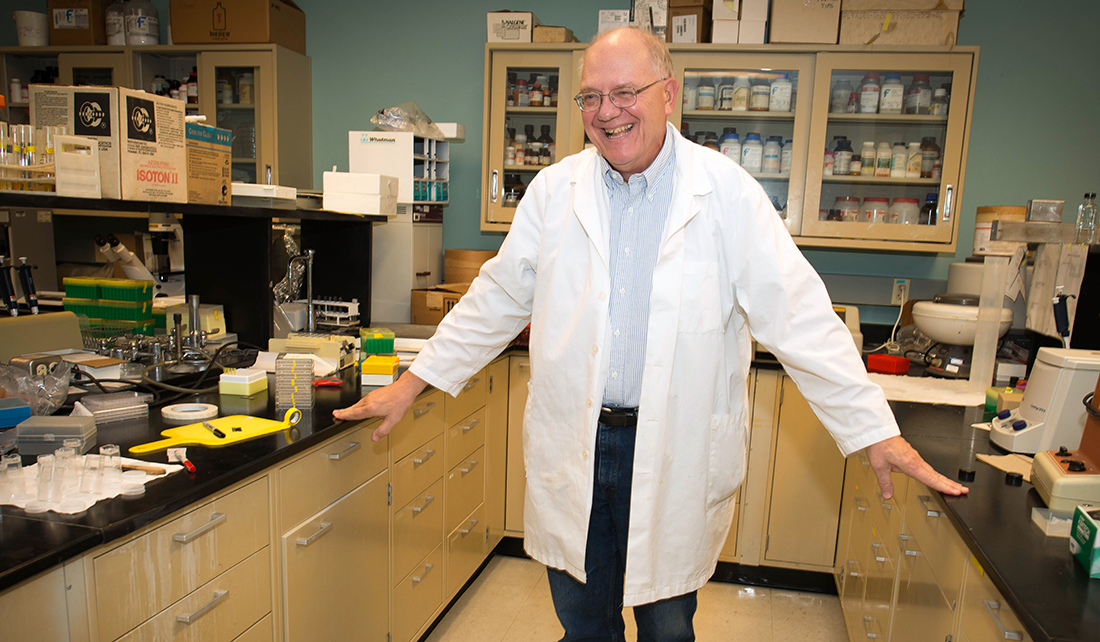 University of Illinois geneticist Michael Plewa discovered that a non-toxic medical diagnostic chemical that accumulates in drinking water sources can become a toxic chemical as water goes through the disinfection process.

IISG has funded 41 Discovery grants since 2009—these small pots of money are awarded to support graduate student work, to help when researchers need a final boost to finish a project, or to explore new questions or follow up on data that may grow into something larger.

Plewa’s project provides a great example of how a Discovery Grant can open the door to new knowledge and provide a stepping stone to answer bigger questions. It’s also a story about how when data doesn’t fit one’s hypothesis, the quest for answers can lead to new discoveries.

In previous research, Plewa’s lab was looking at the connection between naturally-occurring iodide in drinking water sources and the creation of very toxic substances through the disinfection process. In their study of 23 cities, they measured the level of toxic iodinated disinfection by-products (DBPs) in the drinking water. “Surprisingly, four cities that had no natural iodine in the water­ still had these toxic iodinated DBPs,” said Plewa. “Where was the iodine coming from?”

At a scientific conference, a colleague suggested that the iodine source in these four water supplies may be from X-ray contrast media, and Plewa set out to find out if that was right. Sure enough, the water samples were tested and had high levels of iopamidol, the most commonly used contrast media.

“We let the data carry us to help us understand,” said Plewa. “It’s a puzzle and an adventure. It’s very exciting.

This project was selected for a 2012 U.S. EPA Scientific and Technological Achievement Award (Level I). According to the EPA, Level 1 is awarded to those who have accomplished an exceptionally high-quality research or technological effort. Awarded work has national significance or has high impact on a broad area of science and technology.

The findings from this project also led to a $495,000 National Science Foundation grant and international collaboration. Working with scientists at the Federal Institute of Hydrology in Germany, the University of Akron in Ohio, and at U.S. EPA, Plewa was able to further study the toxicity of contrast media and the mechanisms of how the chemical change happens.

“When we studied five contrast agents, only iopamidol transformed into a toxic substance during disinfection, but iopamidol is also the most widely used.” said Plewa.

And as their adventure in science continued, Plewa and his team learned that their theory of how iopamidol was transformed was, in fact, wrong. Instead, they discovered it was a very different mechanism, which opened a door to new information. They were able to identify a molecule associated with these toxic chemicals that inhibits an enzyme involved in cellular metabolism. This molecule could be contributing to neurological diseases, like Alzheimer’s, or to birth defects.

“There’s much about this that we still don’t understand,” said Plewa, and he defers to medical researchers to make any direct health connections.

“But since 1974, we’ve also identified over 600 disinfection by-products, which is maybe only 50 percent of what’s in the water,” he added. “And of these, we’ve analyzed only a few. It makes sense to identify the most toxic chemicals and modify the disinfection process to reduce their presence. The goal is to make good drinking water better.”