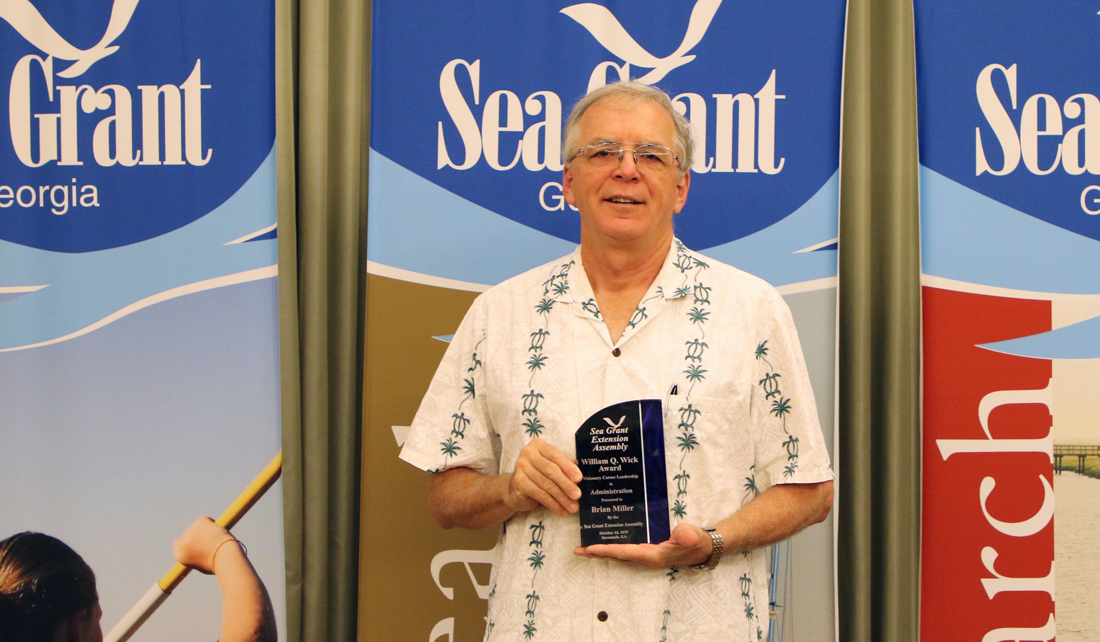 Illinois-Indiana Sea Grant (IISG) is having a good year in terms of recognition by our peers. Adding to the list of awards recently won by IISG specialists, Brian Miller and Irene Miles were distinguished at a Sea Grant conference in Savannah, Georgia in October. Together, they have over 40 years of combined service to the program.

Miller joined IISG in 1994 as the extension program leader and served as the program director for 10 years until his retirement in 2018. He was nominated for his tenure leading IISG administration, but also his regional and national impact.

Miller was also honored as one of the founders of Sea Grant Academy. The academy kicked off in 2005 as an opportunity for Sea Grant extension specialists to engage in two weeks of training and professional development, benefiting their work and the work of all Sea Grant programs at large. Since then, it has become a Sea Grant institution, and the training opportunity has expanded to include communicators and other new Sea Granters around the network. 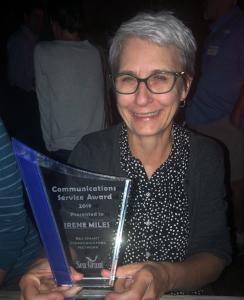 On the same night Miller took home the Wick Award, the national Sea Grant Communicators Network honored Irene Miles with the 2019 Communications Service Award. Presented every two years, the award recognizes an individual’s contribution to the Sea Grant network and to the profession, whether that person is recently retired or still actively contributing.

This year, several worthy nominations were put forward and judges reported experiencing great difficulty in selecting a winner from a pool of talented and deserving candidates.

The judges recognized Miles, who has been with Illinois-Indiana Sea Grant since 2001 and now serves as the strategic communication coordinator, for success in her craft as well as contributions to IISG and national Sea Grant communication efforts. The award presenters noted that she is an “unsung hero” with a history of innovative communication campaigns.

During her time with Sea Grant, Miles has won several awards for communication projects and has reached millions of people with messaging about environmental issues, with the goal of informing and helping spark behavior change to create a more sustainable world. One of her most notable projects involved working with the National Sea Grant Office to create a 15-second public service announcement that aired on the CBS Jumbotron “Super Screen” in New York City’s Times Square. The “Don’t Flush Medicine” message ran for four months in 2011 and 2012, with an estimated 500,000 people going through Times Square every day and one million people crowding the streets over New Year’s Eve.

Miles brings visibility to IISG in all she does, from science stories and annual reporting to educational exhibits and social media campaigns. She knows the IISG program and specialists better than anyone and continues to do high-quality work celebrating our achievements.