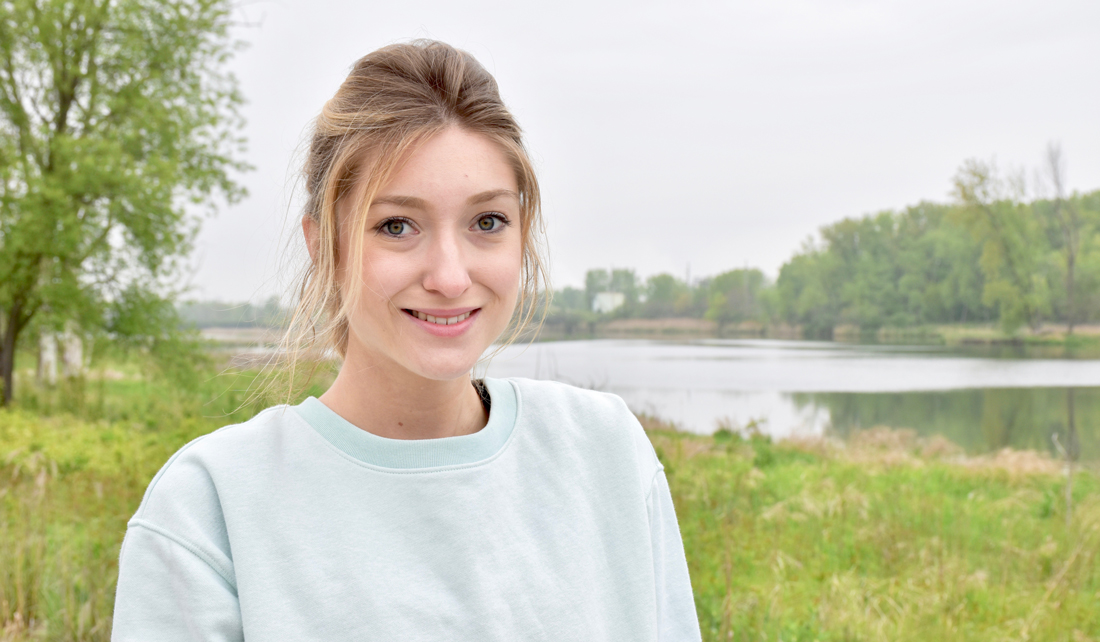 Victoria Wallace is interning with Illinois-Indiana Sea Grant (IISG) as a recent graduate of the University of Illinois at Urbana-Champaign with a B.S. in Integrative Biology and a B.A. in Global Studies.

On the first day of my internship, I brought a suitcase to work. I was leaving Champaign-Urbana that afternoon to begin a weeklong journey traveling up and down the western coast of Lake Michigan, from Chicago to Sheboygan to Milwaukee. The main event was the 2018 Great Lakes Areas of Concern Conference, held this year in Sheboygan, which was to be an immersive introduction to the themes and issues addressed during my internship.

The next morning, my new supervisor, Caitie Nigrelli, trotted me around the U.S. EPA office in Chicago, introducing me to her colleagues. It was the beginning of a whirlwind week of introductions, and I had to quickly learn to explain who I was and how my work would be relevant to a world I’d only just entered. A world, I came to learn, that was ruled by acronyms.

It quickly became hard for me to explain my internship to friends and family without clarifying at least three or four acronyms—shorthand used so ubiquitously by a small sphere of professionals that they often forget how foreign the strings of letters are to laypeople. And I was not much different when I arrived at this bustling conference in Sheboygan. Even though I studied biology and had been involved in research on aquatic invasive species in the Great Lakes as an undergraduate at the University of the Illinois, I had never heard anyone talk about the Areas of Concern. That morning in the EPA office, I even asked a project manager what “AOC” stands for, unaware of just how green I was.

Learning about Areas of Concern

Over the course of my internship, I have come to see this world with much greater clarity, gaining familiarity not just with the terminology, but with many of the people who undertake these massive projects. The Areas of Concern (AOCs for short) are geographic areas, usually rivers and estuaries, throughout the Great Lakes that have undergone serious environmental degradation. Most of them have suffered historically from industrial and municipal pollution, often leaving behind a legacy of sediments containing toxic concentrations of substances such as PCBs, PAHs and heavy metals.

Because of their industrial histories and gradual degradation, the AOCs are also often some of the most economically depressed areas in the region. The list of AOC communities reads almost like a roll call of rust belt cities: Cleveland, Ohio; Detroit, Mich.; Milwaukee, Wis.; Buffalo, N.Y.; Erie, Pa.; and Gary, Ind., all lie near or within Areas of Concern. And that’s just six of the 43 AOCs.

One of those 43 is the Sheboygan River AOC, a location specifically chosen for the conference not because of the extent of its blight, but for the significance of its transformation. New development, an active harbor and a slew of recreational opportunities are a testament to the work of the AOC specialists—and to the social value of restoring a degraded resource. This is the final chapter of AOC restoration, when the community regains access to a waterfront it had turned its back on, sees its beauty and its potential, and adopts practices that promote its long-term health.

Wallace helped fourth grade students from East Chicago, Ind. discover the oddities and marvels of nature at the Grand Calumet Stewardship Day at a macroinvertebrate station.

After the crucible that was the AOC conference, I went on to see the Milwaukee Estuary AOC, helped facilitate a stewardship event in the Grand Calumet River AOC, and toured two sites in the infamous Cuyahoga River AOC. I’ve also produced outreach materials for the Muskegon Lake and St. Louis River AOCs. Most importantly, I’ve worked with Caitie to design a research project to better understand the social transformation after the remediation and restoration work is done. It’s being dubbed “revitalization” in the AOC world, and it’s changing how we think about environmental restoration.

If restoring a river can revitalize a community, what does that mean for the future of the Great Lakes? Can the history of exploitation be replaced with a narrative of stewardship, growth, and mutual benefit? I think that there’s a chance it can, but there needs to be a concerted effort. The research I’ve helped develop will push things in that direction by asking the AOC world to confront the question, “Who are we doing all of this for?” And, as a newly-minted environmental scientist, that’s certainly a question I’ll keep in mind as my career develops and matures.