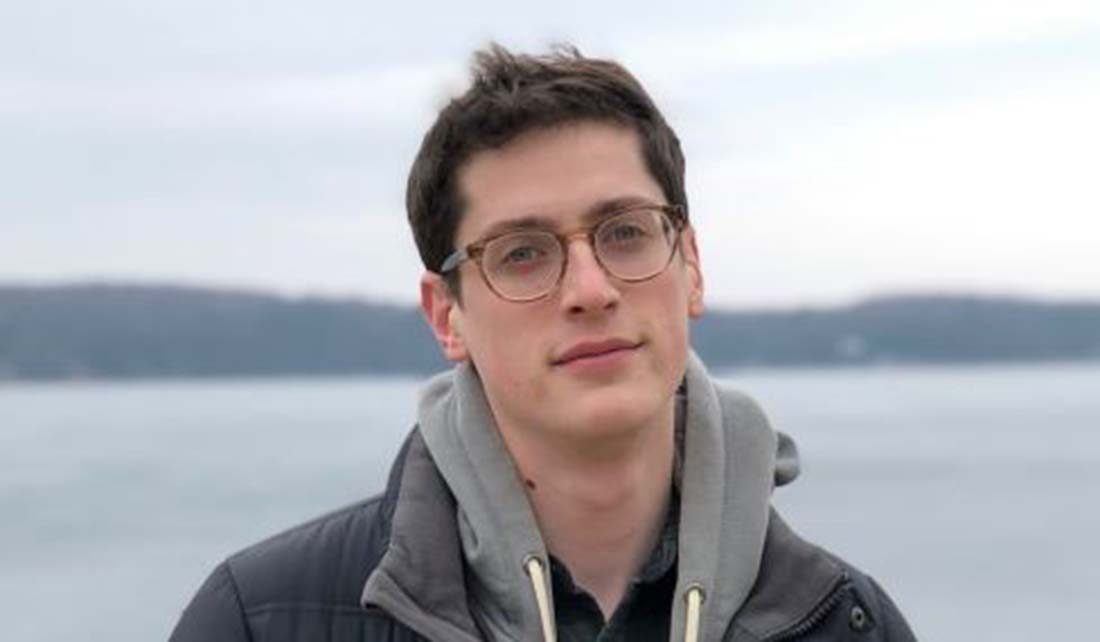 Victor Schultz is a recent graduate of the Van Meter Ecohydrology lab at the University of Illinois at Chicago (lab now located at Pennsylvania State University), and part of the inaugural Illinois-Indiana Sea Grant Graduate Student Scholars cohort. During his master’s work, Victor studied groundwater nitrate in the Upper Mississippi River Basin, specializing in hydrology, statistical and numerical modeling, and Geographic Information Systems (or GIS). An avid runner, Victor previously studied Environmental Studies and Political Science at Knox College in Galesburg, Illinois, and Spanish Language and Literature at the Universidad de Palermo in Buenos Aires, Argentina. A highlight of his graduate school experience was participating in the NASA DEVELOP program, where he applied new skills and techniques to drought monitoring in Illinois.

While Victor Schultz was a master’s student, he was interested in the effects of nitrate runoff on both ecology and human health. Nitrates form when nitrogen (or N, an essential element for plant life) combines with oxygen or ozone. Nitrates are among the most common aquatic human pollutants in the United States. Through his research, Schultz studied nitrate contamination in the Upper Mississippi River Basin, which includes large areas of Lake Michigan states like Wisconsin, Illinois and Indiana. However, it is separate from the Lake Michigan watershed, with one artificial exception: the Chicago River, whose flow was reversed around the turn of the 20th Century. 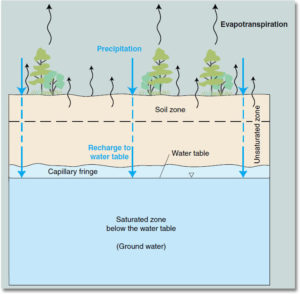 Agricultural land is very common in the Upper Mississippi River Basin. Nitrogen fertilizer, livestock waste, and nitrogen converted into a biologically usable form by crops like soybeans are common sources of N. Nitrogen can be transported by rivers and streams through the watershed, or accumulate in the soil and groundwater of the area. Either way can cause problems: excess N that is transported by rivers and streams can cause low-oxygen ‘dead zones’ and algal blooms in lakes and coastal ecosystems, while the N that is stored in the soil and groundwater can create health hazards in well water, and may pose future risks to surface water.

Nitrate contamination in lakes, rivers, soil and groundwater is about 20 times what it was 70 years ago, but the amount of nitrogen that has accumulated in underground aquifers of the Great Lakes region remains relatively unknown. This is an important data gap, as approximately 40 million Americans rely on private wells for drinking water. Nitrogen introduced via the landscape can affect drinking water safety and surface water quality for more than 30 years, and, as climate change affects the Midwest, more and more individuals and organizations may need to use groundwater in their daily activities. 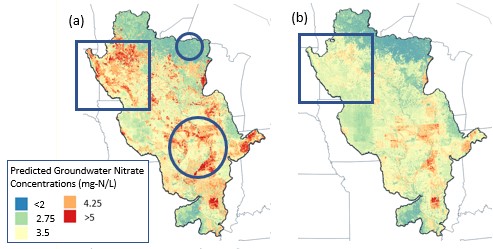 These two maps show the results of the Random Forest model. Map (a) shows predictions of nitrate in groundwater that is closer to the surface, while map (b) shows predictions of nitrate in deeper groundwater. The two circles show locations that are the same depth, but have very different landcover, and the model predicts very different nitrate concentrations. The two squares show how the same location can have very different nitrate concentrations, depending on how far down you go. (Graphic provided by Victor Schultz)

Through his research, Schultz tested the ability of more than 70 variables to predict nitrate concentrations in groundwater. The variables included land use, soil type, bedrock and even the density of hogs. He used Random Forest, a machine learning method, to combine many models into one prediction. The amount of nitrate in groundwater wells was best predicted by the depth of the well, the surrounding land use, and the amount of bedrock.

Many people helped Schultz during his project, including the owners of the wells that he sampled for nitrates. He hopes that his work can be a starting point for localized studies in the Great Lakes region, as high nitrate levels in drinking water may lead to greater risk of thyroid, bladder and breast cancers, or birth defects in babies. Most water treatment plants remove some level of nitrates, but for the about 25% of Indiana residents who rely on well water as their main drinking water, additional information on where nitrate levels could be highest should help. Victor is also excited about the modeling framework he used because it demonstrates machine learning modeling as a powerful tool for estimating contaminant levels on a regional scale.

Much of Schultz’s research happened during the COVID-19 pandemic, so he and his cat Chili Flake had to adapt to working from home. He found that the combination of a standing desk, more houseplants and the same computer setup as in his office on the UIC campus led to a nice balance, and Chili Flake found new places to sit. After graduation, Victor will be looking for jobs in environmental science as a consultant or researcher. In his future career, he hopes to showcase the GIS, programming, data analysis, science communication and long-term project management skills that he gained through his graduate research experience.

You can learn more about Victor’s research by following @voschultz on Twitter.