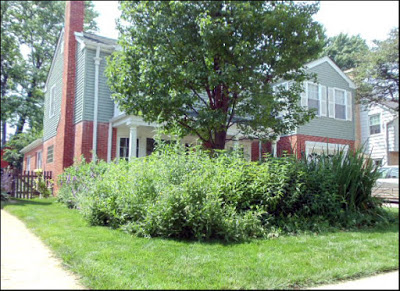 It is not uncommon for more than one home on a block to have excess water due to stormwater runoff. The good thing about a rain garden is that they can adapt to suit the need of the homeowner. They can be placed wherever on the property they are needed.
Originally Dan and Libby Reimann’s Mount Prospect, Ill. home did not have any problems with standing water. It was not until the couple had an addition built onto their house did they encounter problems. During the construction, their sump pump began to run continuously, flooding their front yard and a portion of the neighbor’s driveway. When the couple contacted local authorities, they were given two suggestions, the Reimanns could tap into the sewer system or they could build a rain garden.
The couple didn’t want to tap into the sewer system if they could avoid it and the village encouraged the idea of a rain garden. With some deliberation as well as online searching and learning more about rain gardens, Dan and Libby decided they would try to build one.
In Dan’s research he came across Kevin Herbert, a landscaper in the northwest suburbs of Chicago. They contacted Herbert to design and construct their garden. Not knowing exactly what they wanted or what to put in the garden, they gave Herbert free reign.  From the shape of the garden to the flowers in the garden, Herbert did it all. 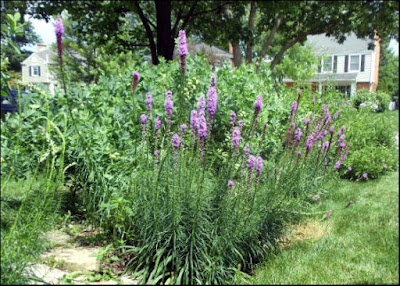 Not only did Herbert take charge of the whole design process but he also helped in the garden’s maintenance. The couple hired him to take care of the garden following its first year of installment. In that year he taught them what to weed, when to cut down plants and provided the couple with pictures of what each plant should look like when fully grown as a way to tell them apart. He left them the initial sketch of the design of the garden with what flowers go where.
The Reimann garden is full of blooming flowers. They were particularly happy with the selection because they were picked to ensure that flowers are always in bloom, spring through fall. In the spring, the garden is adorned by blue and pink from the blue flags, blazing star and prairie smoke. When summer begins, the Reimanns can start to see white, purple and yellow from the meadowsweet, Monarda and black-eyed Susans. Black-eyed Susans are joined by white turtlehead and New England asters bloom in the late summer to early fall. The garden keeps these colors until the frost.
Dan’s advice to homeowners who know little to nothing about rain gardens, is to not let fear stop them. “They should just go for it,” Dan said. “And don’t be afraid to ask for help.”
When their neighbor Amy Hempleman saw how well the garden was working she took his advice, even taking their suggestion of having Herbert help create their garden in the spring of 2014. 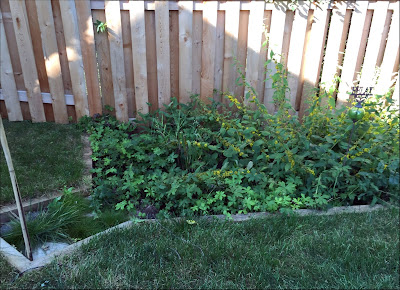 The Hempleman garden was different in one major way—the location. While water was spilling into the front of the Reimann’s yard, Hempleman had to solve a problem in the backyard. The back corner just behind the garage began to flood from excess water coming from the gutters. Hebert used this as well as the natural slope of the yard to his advantage when he designed this garden. The water is routed along the sidewalk downspout and into the garden.
Hempleman is very happy with the garden, describing it as attractive and bright in the summer. When in full bloom, the garden has bluejackets, broad leaf goldenrod, nodding onion as well as ivory sedge and plantain leaved sedge. The balance between flowers and grass-like plants creates a full garden that does its job as well as adding to Hempleman’s yard.

Not only was Hempleman happy with the garden’s appearance, but she also feels good about the way it took care of the water problem. This experience has given Hempleman a new interest in plants, to be more specific, with native plants. As she has seen the beauty and functionality of them firsthand, she has started to notice and look for them. She expressed a wish for clearer labels of plants, to make it easier for gardeners that want to find native plants. This would also educate people who may not know the native plants of their area and could pique their interest.
Hempleman looks forward to watching her garden grow in the upcoming years.