“Be A Hero” is the invasive species prevention message in Illinois 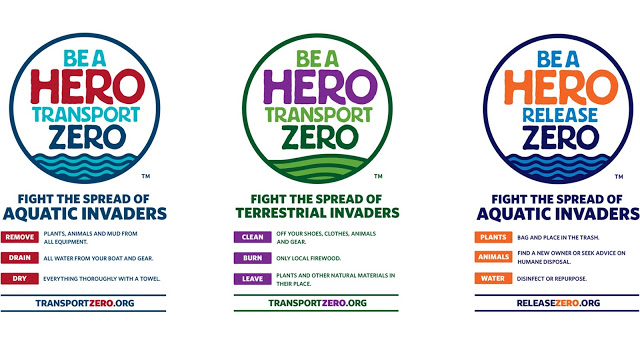 “Be A Hero” is now the primary invasive species awareness campaign in Illinois. Boaters, anglers, and divers have heard this message, but now the comprehensive campaign provides easy tips to help water gardeners, teachers and aquarium hobbyists curb the spread of aquatic invaders. Plus, Be A Hero also provides guidance to hunters, campers and hikers to prevent the spread of species that threaten habitats on land.

“The problem of invasive species in our Illinois waters and lands has never been worse than it is today,” said Paul Deizman, who leads forest management at the Illinois Department of Natural Resources (IDNR). “Unfortunately, without action, the problem of invasive species—which are displacing natural flora and fauna as well as interfering in land and water management, critical ecological processes and biodiversity—could become irreversible.
For example, many commercially-sold plants and animals pose a risk to Illinois habitats. In fact, plants like Brazilian elodea, often sold as anacharis, have already reached several Illinois lakes and ponds, where they often form mats that block sunlight needed by other species and hinder recreation. And more invaders lurk on the horizon.
To prevent their spread, Be A Hero—Release Zero™ introduces teachers, water gardeners, aquarium hobbyists, and others who buy and sell species to safe alternatives to releasing unwanted plants and animals.
In addition, Be A Hero—Transport Zero™ now also addresses the spread of terrestrial invaders with tips for hikers, campers, and hunters who may accidentally carry species to new habitats.
Be A Hero kicked off in 2013 with a media campaign encouraging recreational water users to take simple steps—remove, drain, and dry—after a day on the water. Be A Hero—Transport Zero™ messages have also been shared one-on-one at boat shows and fishing tournaments. An IISG survey of boat show attendees found that people who have heard these messages are more likely to take action to prevent the spread of invasive species.
“We have found that the Be A Hero message resonates with anglers and boaters as we talk with them at state fair and other venues,” said Kevin Irons, IDNR aquatic invasive species program manager, “Be A Hero is unique in efforts to raise awareness about this issue. It is a positive message.”
“This campaign is an important and significant outreach and marketing tool we absolutely need,” Deizman added. “It is great to have the three Be A Hero logos working together to make headway on the invasive species problem in Illinois.”
Be A Hero is a collaboration between IDNR and Illinois-Indiana Sea Grant (IISG). “Now that we have launched the campaigns, we are looking for partners to help us get the word out,” said Pat Charlebois, IISG aquatic invasive species outreach coordinator. “We have graphics that your organization can use online, at public events and on promotional materials.”
For more information visit TransportZero.org and ReleaseZero.org.
« Previous Post
Next Post »