Posted December 2nd, 2013 in Aquatic Invasive Species
The New Zealand mud snail is on the move in Wisconsin, and officials are calling on anglers, hunters, and boaters to help prevent any further spread from this aquatic invader. 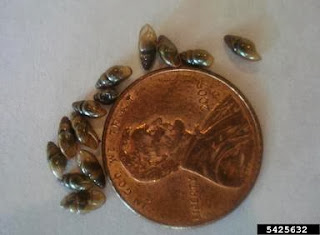 The invasive snail first moved into the Great Lakes decades ago and took up residency in Lake Michigan about 5 years ago. Inland lakes and rivers in the Midwest, though, had remained snail-free. That is until last month, when the Wisconsin Department of Natural Resources reported finding the snails in Black Earth Creek, about 25 miles north of the Illinois state line.

To keep this rapidly-reproducing snail from taking over local waterways and forcing out native species, officials in Illinois and Wisconsin are asking recreational water users and other outdoor enthusiasts to take three simple steps after a day near the water:
·         Remove all plants, animals, and mud from boats, trailers, and equipment
·         Drain everything, including bait buckets and live wells
·         Dry everything with a towel
The small size of this invasive species—no more than 5 mm in length—makes them nearly impossible to spot. But diligently following these simple procedures can ensure that the New Zealand mud snail isn’t accidently carried unseen to from one body of water to another.

To learn more about what you can do to help prevent the spread of the New Zealand mud snail and other invasive species, visit www.TransportZero.org.