With summer vacation on the horizon, NOAA and the National Park Service are alerting beach-goers to the threat of rip currents and how to prevent drowning from their strong and potentially fatal grip.

Rip currents are the leading surf hazard, claiming more than 100 lives per year nationally. For that reason, NOAA and NPS are teaming up to sponsor Rip Current Awareness Week, June 7-13, with the theme Break the Grip of the Rip®.

Rip currents are narrow channels of fast-moving water that pull swimmers away from the shore. Moving at speeds of up to eight feet per second, rip currents are surprisingly strong and swift. They account for more than 80 percent of the tens of thousands of rescues performed by beach lifeguards in the United States annually.

“Before going into the water, check the rip current outlook, swim on guarded beaches and know how to escape a rip current’s grip,” said Jack Hayes, Ph.D., director of NOAA’s National Weather Service. “Doing so can save your life.”

If you are caught in a rip current, swim in a direction following the shoreline. When free of the current, swim at an angle away from the current toward shore. Swimmers who try to swim against a rip current straight back to shore often fail to overcome its strength, risking exhaustion and drowning.

“Every year, more than 75 million visitors come to swim, fish, snorkel, scuba dive, boat and enjoy the wildlife and majestic scenery in the coastal areas of our National Park System,” said Dan Wenk, acting director of the National Park Service. “The National Park Service has a long partnership with NOAA and its National Weather Service to enhance our ability to provide visitors with the latest information on water safety.”

Rip currents can form at all surf beaches so keep these safety tips in mind:
• Check for surf zone forecasts at NOAA’s National Weather Service Rip Current Safety.
• Look for signs and flags posted to warn about rip currents;
• Do not swim against a rip current;
• Escape rip currents by swimming in a direction following the shoreline until you are free of the rip current;
• Never swim alone.

“Sea Grant and the National Weather Service have placed rip current signs in English and Spanish on ocean and Great Lakes beaches throughout the nation to warn swimmers of the dangers posed by this hazard. It is critical that all beach-goers know how to identify a rip current, and that they know what to do if they are caught in one,” said Leon M. Cammen, Ph.D., director of NOAA’s National Sea Grant College Program.

NOAA understands and predicts changes in the Earth’s environment, from the depths of the ocean to the surface of the sun, and conserves and manages our coastal and marine resources.

Break the Grip of the Rip is a registered trademark of the National Oceanic and Atmospheric Administration.

We are thrilled to announce our keynote speaker for the first day of #ECEC21, Daniel L. Villeneuve! Learn more about our keynote speakers and register today for the Emerging Contaminants in the Environment Conference: http://go.illinois.edu/ECEC21 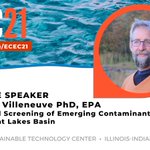