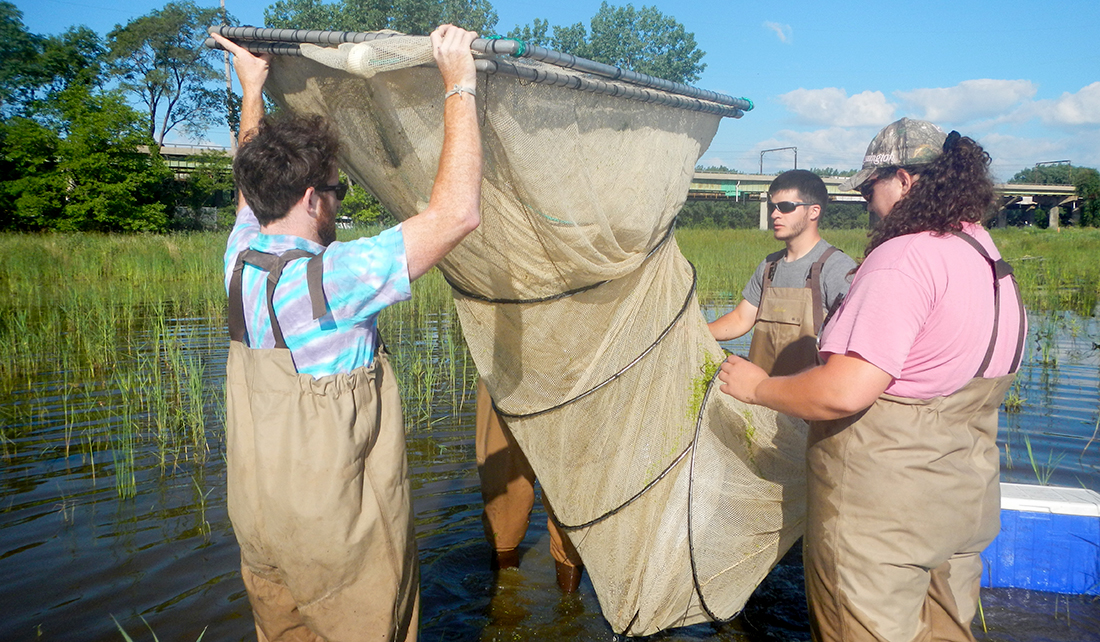 Weatherfish, known in scientific circles as Misgurnus anguillicaudatus, were spotted in the recently restored Indiana wetland, Roxana Marsh, by researchers from the University of Notre Dame.

PhD candidate Katherine O’Reilly, who led the team that confirmed the weatherfish finding, was at the marsh in 2015 for an IISG-funded project evaluating how coastal wetlands around Lake Michigan support the nearshore lake food webs.

“The main goal of the project is to figure out how fish moving between these habitats might be moving energy,” O’Reilly said.

“You might have fish moving out to the nearshore and becoming prey for larger sport fish. That moves food, energy, and nutrients from these highly productive coastal wetland systems to the less productive lake habitat.”

When the researchers returned to their nets left out overnight as part of routine sampling, what they saw was baffling. After some “on-the-spot Googling,” they figured out what they had.

“I wasn’t familiar with the weatherfish. I saw these little eel-like things, something I wasn’t used to seeing in the Great Lakes,” O’Reilly said. “We must have just hit the weatherfish jackpot.”

The weatherfish, originally from Eastern Asia, has been in the United States since the early twentieth century. It was brought over through the aquarium trade. Anglers also have used them as bait because of their wriggly disposition. They are greenish-grey-brown and are typically less than eight inches.

They found their way to Cook County’s North Shore Channel in 1987 and the Chicago Sanitary and Ship Canal in 1994. By 2005, a  survey confirmed their presence in the West and East branches of the Grand Calumet River and the Indiana Harbor Canal.

But what’s particularly unique about this species is its breathing anatomy. The weatherfish can use their intestine to supplement their gills when oxygen conditions in the water are low. They’re tolerant in what are considered rough, degraded habitats.

In fact, that lung structure is what gave the weatherfish its name. Because they have an intestine that can take in air, they’re very sensitive to changes in barometric pressure. There are reports of when there are drops in pressure, they start to get increasingly active in anticipation of an impending storm. Some of the Roxana Marsh weatherfish were brought back to the lab at University of Notre Dame for further analysis.

Many of the fish O’Reilly and (then) undergraduate Amelia McReynolds pulled up in their nets that day were females filled with eggs, which made O’Reilly think that they may have been spawning in the marsh. Through further investigation, they found that the weatherfish diet of small benthic invertebrates and insects was similar to that of some native fish. She posits that could potentially have an impact down the road if they out-compete the native fish for resources.

Gary Lamberti, O’Reilly’s adviser, was impressed by his students’ findings.

“It really is the most exciting thing in science when you’re doing some routine work and you’re expecting the usual and then you find something that’s very different,” Lamberti said.

To learn more about how to prevent the spread of aquatic invasive species, visit Be A Hero—Transport Zero™