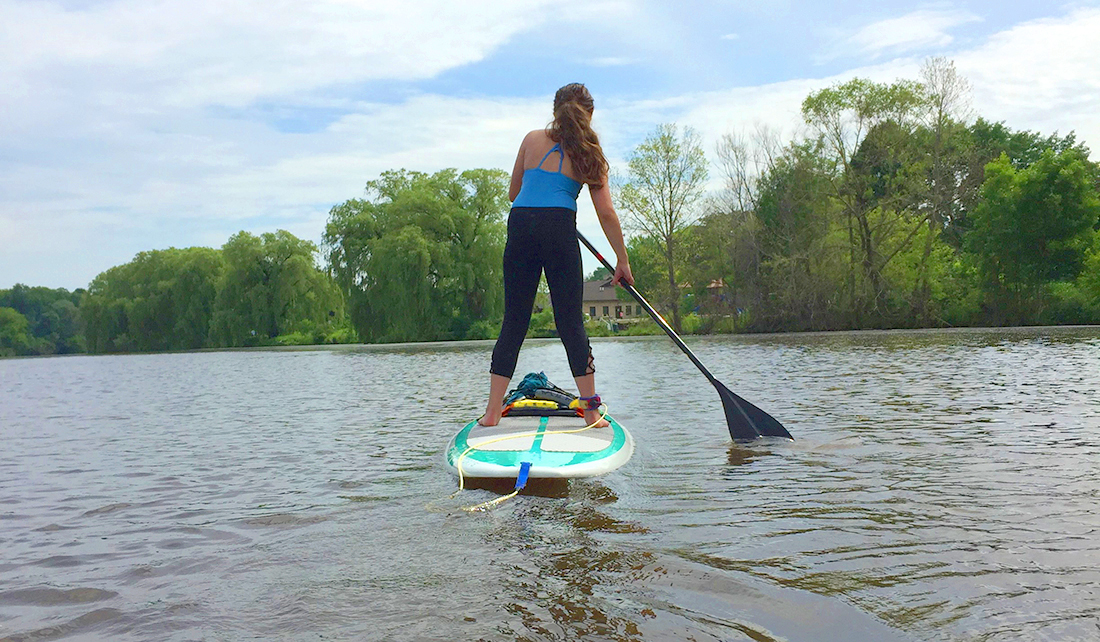 The Sheboygan River has become a popular place for recreation since the 2012 cleanup. (Photo courtesy of Jennifer Nigrelli)

Lately, Sheboygan is on the upswing. This city in Wisconsin that sits along the Sheboygan River is booming with new housing, more tourism, and more water-based recreation opportunities, according to a recent Great Lakes Commission study. Illinois-Indiana Sea Grant (IISG), as part of a team of partners, provided expertise that contributed to this success story.

Not so long ago, the river was considered a black eye on the community. Labeled one of the most polluted rivers in the country, it was contaminated with an alphabet soup of PCBs and PAHs. With funding from the Great Lakes Restoration Initiative, approximately 300,000 cubic yards of contaminated sediment (or 15,000 full dump trucks) were removed from the river in 2012-2013. As a result, river-goers enjoy a deeper river with better navigation and access, and a cleaner habitat for fish and wildlife to thrive.

“There’s no question in my mind that if that cleanup effort hadn’t gone on, we would not see the kind of development and enthusiasm going on in our community,” said Adam Payne, Sheboygan County administrator. “It absolutely triggered a lot of the good things that are in play.”

As is typical for projects funded through the Great Lakes Legacy Act, partners were key to its success, including federal, state, local—agencies, non-for-profits, private companies—the list is extensive. “The level of collaboration and teamwork was unprecedented of anything I had seen in my career,” added Payne.

For its part, IISG funded research to assess the economic impact of the contaminated river on housing prices. “We looked at actual sales of single family houses in the area from 2002-2004,” explained John Braden, University of Illinois economist (now retired). “And we surveyed 850 residents to understand people’s perceptions of the river, and their willingness to pay more for housing if the river was cleaned up.”

Braden found that property values for homes within five miles of the contaminated waterways were significantly depressed—an 8 percent discount, on average. This research and related Sea Grant outreach helped illustrate the value of the cleanup, helped to keep the Sheboygan community informed about the remediation process as it happened, and helped to change the conversation about sediment remediation.

“Sediment remediation is very expensive, so how can we justify these multi-million dollar projects?” said Caitie Nigrelli, IISG social scientist. “The main goal is to improve environmental quality of water resources, but if we understand more of the benefits, we can make a better case for these projects.”

Nigrelli worked with a Sheboygan outreach team in 2012 to provide information to stakeholders and the public. She helped convey the results of Braden’s research in her outreach efforts through publications and other venues. In addition, bringing her social science expertise to the project, she oversaw a study to bring community perceptions to light to better understand how to communicate about the sediment remediation project and its benefits to the public.

“We found that while the river was viewed as an asset, it had a negative stigma,” said Nigrelli. “Our interviews before the remediation revealed that residents saw the water as unclean and some were hesitant and even afraid to come in contact with the water.”

Due to years of sedimentation, the depth of Sheboygan River was also viewed as a major concern as its shallowness limited access for larger boats and sailboats. While the point of the remediation was to remove contaminants, a side benefit was an increase in river depth. These and other findings helped Nigrelli and the outreach team target public information to address specific concerns.

Payne describes the value of a well-informed public in terms of just getting through the remediation process. “To put it in perspective, when we were removing the contaminated soil from the river and harbor, we had trucks coming and going through the heart of the city every three to five minutes, 24/7. That’s disruptive, lots of dust, noise, traffic and that obviously raises folks eyebrows and raises concerns. I think where outreach efforts were so helpful is in raising awareness with the public—these potential benefits are why we are going to go through this.”

To learn more about remediation partnership possibilities, “A Seat at the Table: Great Lakes Legacy Act” is a new video that explains what it means to be a cost-share partner with the Environmental Protection Agency under GLLA. The video uses interviews with partners to describe the benefits and challenges of cost-share partnering, the cost-sharing mechanism, examples of in-kind services and the flexibility of partnerships.

To see what successful partnerships can accomplish, follow Nigrelli (@Gr8LakesLady) on Twitter as she has been sharing 22 sediment site success stories, including before and after photos, contamination causes, partnerships and cleanup details. Follow and join the conversation using #22SedimentStories. 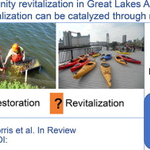