Why are algal bloom problems growing? 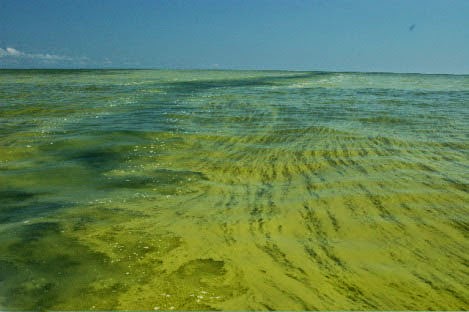 The recent contamination of drinking water in Toledo, Ohio brought the risks of algal blooms center stage and raised serious concerns for the future. Questions on everybody’s mind are what are toxic algal blooms, what causes them, and what can we do? Michael Brennan, IISG’s water quality outreach specialist, has some answers:

Regional scientists have been concerned about algal blooms like the one we saw a few weeks ago for some time. Its unique conditions make western Lake Erie particularly susceptible to algae blooms, both toxic and non-toxic. Warm temperatures, shallow, slow-moving water, and excessive nitrogen and phosphorus concentrations create optimal conditions for algae to thrive during summer months.
Let’s step back a bit. Algal blooms are essentially overgrowths of algae triggered by excess concentrations of nitrogen and phosphorus carried in stormwater runoff from lawns, leaky septic systems, golf courses, and agricultural fields to nearby waterbodies. The severity of a seasonal algal bloom is directly related to annual rainfall accumulation and the number of severe rainfall events
Non-toxic blooms occur all over the Great Lakes. Occasionally, the algae associated with blooms—a cyanobacteria—releases a toxin known as microcystin. This is the toxin responsible for contaminating the drinking water of over 500,000 people in the Toledo area.
But even non-toxic algal blooms are harmful. When rapid algal growth dies off, decomposition sucks oxygen out of the water, depriving freshwater organisms of the oxygen needed to survive. Decomposition also slowly releases nitrogen and phosphorus back to the water column, setting the stage for the cycle to start again next season.
There are no quick fixes in Lake Erie or any of the other lakes. But there are things we can do. Better stormwater management through green infrastructure  is key. Unlike impervious surfaces, the plants and trees used in green infrastructure can absorb water and filter out pollutants before it reaches a waterbody.
Individuals can help prevent algal blooms as well. Homeowners and gardeners can adopt natural lawn and landscaping practices that conserve water and reduce stormwater runoff. Most of these practices are simple and cost-effective, like applying nitrogen fertilizer only in fall, removing weeds by pulling and hoeing, and limiting watering to the mornings and evenings.
For more information on what you can do please see the Environmental Protection Agency nutrient pollution page.
**Photo courtesy of Ohio Department of Natural Resources

In the news: Cause of Lake Erie’s algae becoming clearer

April 16th, 2014 by iisg_superadmin
Lake Erie is one of the Great Lakes that is most affected by toxic algal blooms, and finding the cause for them is the first step in reducing or preventing them. Scientists may be closer to understanding just what causes these harmful blooms.
From CircleofBlue.Org:

“Algal blooms and dead zones in Lake Erie were severe during the 1960s, caused primarily by large releases of phosphorus from sewage and industrial plants. The 1972 federal Clean Water Act and the 1978 bi-national Great Lakes Water Quality Agreement led to dramatic reductions in phosphorus from these sources and a rapid improvement in water quality.
Lake Erie, however, saw a reemergence of the algal blooms and the growth of the dead zone in the mid-1990s, and the problems are worsening. In 2011, for example, Lake Erie experienced its most severe bloom of toxic algae on record. Last fall a toxic algal bloom in the lake forced officials to shut off a public water supply system in Ohio.
The new studies, part of the Ecological Forecasting (EcoFore) Lake Erie project led by researchers at the University of Michigan, found that the current targets to reduce phosphorus to alleviate algal blooms in Lake Erie may not be low enough to revive the dead zone. That conclusion informed the International Joint Commission’s recommendations in February for improving Lake Erie’s water quality.
The findings, and those of other studies from across the Great Lakes region, are delivering an ever clearer picture of the specific causes of nonpoint phosphorus runoff, algal blooms, and dead zones. The basic drivers of these problems are no longer unknown. The new research fills a critical void in information that has been often cited as a reason that strict regulations on nonpoint pollution sources, including agriculture, were not regulated under the 1972 federal Clean Water Act.”

Read the complete article and findings at the link above.

March 3rd, 2014 by iisg_superadmin
Illinois-Indiana Sea Grant’s Tomas Höök, associate director for research, was part of a team of researchers involved in a comprehensive study on Lake Erie’s health and measures needed to protect it.
From Phys.org:

“The report from the multi-institution EcoFore-Lake Erie project states that a 46 percent reduction in the amount, or load, of phosphorus pollution would be needed to shrink Lake Erie’s Central Basin hypoxic zone to a size last seen in the mid-1990s—a time that coincided with the recovery of several recreational and commercial fisheries in the lake’s west and central basins.
Phosphorus is a nutrient used in crop fertilizers. Excess phosphorus washes off croplands during rainstorms and flows downstream in rivers that feed the Great Lakes. Once in the lakes, phosphorus can trigger algae blooms. When the algae die and sink to the lake bottom, oxygen-consuming bacteria feed on them and create hypoxic zones in the process. Many fish shun these oxygen-starved waters, which significantly reduce the amount of suitable habitat available to the fish.
The study, accepted for publication in a forthcoming edition of the Journal of Great Lakes Research, calls for Central Basin phosphorus reductions considerably higher than other recent recommendations, including a proposal issued last year by the Ohio Lake Erie Phosphorus Task Force aimed at avoiding Western Basin toxic algae blooms. The new report is a synthesis of the major findings from the EcoFore-Lake Erie project, created in 2005 and supported by the U.S. National Oceanic and Atmospheric Administration’s Center for Sponsored Coastal Ocean Research.”

In the news: A “stirring” solution to algae problems?

February 6th, 2014 by iisg_superadmin
Jordan Lake in North Carolina suffers from a condition similar to Lake Erie – algal blooms that threaten wildlife and water quality. Due to nutrient runoff, the blooms continue to grow and pose a significant problem for the community that relies on it for water.
While the EPA rules regarding processes and procedures to reduce runoff and mitigate the problem await implementation, there is a proposal for a potentially less expensive and more immediate way to reduce the algal blooms in the lake.
From Lake Scientist:

“The N.C. General Assembly authorized a $1.44 million plan to put 36 floating water circulators into the lake. It’s a hefty price tag, but is actually one of the drivers for the experiment. If it works, the savings could be huge as costs for implementing the EPA rules are estimated at $1 to $2 billion.
Representatives from Medora Corporation, the company that will supply the mixers, say that the mixing process may confuse the algae, making them think they’re at different depths in the water. It could make them more vulnerable to viruses. The reps also say the mixers will work, claiming a 90 to 95 percent success rate in other lakes.”

Read more about the proposal at the link above.

In the news: Lake Erie once again at risk from toxic algae

Lake Erie, one of the Great Lakes that began to rebound significantly thanks to the Clean Water Act and several cleanup projects, is being threatened by toxic blue-green algae. Fed by fertilizers and runoff, the algae can deplete oxygen levels in the water and be detrimental to the lake’s health.

From The Plain Dealer:

“The Western Basin of Lake Erie, located roughly from Toledo to Huron, is becoming seriously affected with toxic blue-green algae. During the summer months, the algal blooms have been so bad that swimmers have emerged from Lake Erie covered in green slime. So far, swimming in Lake Erie has not been prohibited as it was in Grand Lake St. Mary’s, however, the thick algal blooms are not very inviting to swimmers and tends to affect the taste of our drinking water.

The enjoyment of Lake Erie for boating and fishing has also become hampered by the costs to repair clogged engines and the costs of reduced economic drivers, such as fishing charters and other recreational opportunities. We are dangerously close to severely restricting our use and enjoyment of one of the world’s greatest natural resources.”

Read the complete article at the link above to learn more about threats to Lake Erie, and read more about Great Lakes health issues and research at our web page.