In the news: A “stirring” solution to algae problems?

February 6th, 2014 by iisg_superadmin
Jordan Lake in North Carolina suffers from a condition similar to Lake Erie – algal blooms that threaten wildlife and water quality. Due to nutrient runoff, the blooms continue to grow and pose a significant problem for the community that relies on it for water.
While the EPA rules regarding processes and procedures to reduce runoff and mitigate the problem await implementation, there is a proposal for a potentially less expensive and more immediate way to reduce the algal blooms in the lake.
From Lake Scientist:

“The N.C. General Assembly authorized a $1.44 million plan to put 36 floating water circulators into the lake. It’s a hefty price tag, but is actually one of the drivers for the experiment. If it works, the savings could be huge as costs for implementing the EPA rules are estimated at $1 to $2 billion.
Representatives from Medora Corporation, the company that will supply the mixers, say that the mixing process may confuse the algae, making them think they’re at different depths in the water. It could make them more vulnerable to viruses. The reps also say the mixers will work, claiming a 90 to 95 percent success rate in other lakes.”

Read more about the proposal at the link above.

August 8th, 2013 by Irene Miles
IISG’s Laura Kammin and Anjanette Riley set sail today on a mission to find plastics in Lake Michigan. The trip is a part of a larger effort to determine if the plastics and microplastics that have been found in the world’s oceans are an issue in the Great Lakes too. Sampling kicked off last year with research trips on Lakes Huron, Superior, and Erie, and the findings came as a bit of a surprise – millions of tiny plastic particles floating in the water in even higher concentrations than in the Great Pacific Garbage Patch. 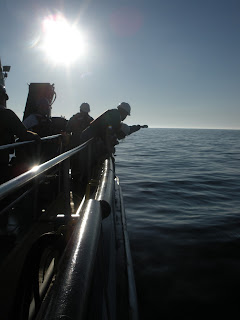 The first round of sampling revealed that the Lakes are home to between 1,500 and 1.7 million plastic particles per square mile, with Lake Erie housing the largest concentrations. Dr. Sherri “Sam” Mason of the State University of New York (SUNY) at Fredonia, Dr. Lorena Rios-Mendoza of University of Wisconsin, and Dr. Marcus Erikson of 5 Gyres Institute have determined that much of the plastic they found was actually microbeads, found in many brands of toothpaste and facial and body scrubs. These tiny pieces of plastic are less than a millimeter in diameter, much too small to be filtered out by wastewater treatment facilities before that water is released into nearby lakes and rivers.

Anjanette and Laura, along with researchers from SUNY at Fredonia and 5 Gyres Institute, are on Lake Michigan this week to see how the plastic load there compares to the other Great lakes. The crew will collect approximately 20 samples between now and August 10 as they zigzag their way across southern Lake Michigan. Dr. Mason will process the samples in the coming months. The research team also plans to extend the project to Lake Ontario and get a second round of samples from Lake Erie later this summer.