July 16th, 2014 by iisg_superadmin
For land use planners, balancing community growth and environmental health is always a challenge. But after months of pilot testing, IISG is putting the final touches on a new web-based tool that will help them do just that. 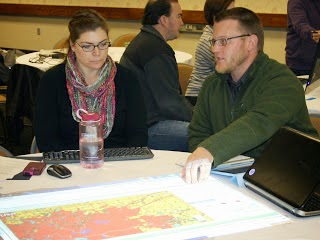 The Tipping Points and Indicators tool uses the latest watershed research and cutting-edge technology to show planners where aquatic ecosystems in their area are in danger of crossing a “tipping point,” triggering rapid and sometimes irreversible shifts in how they function. With help from a Sea Grant facilitator, planners can use the tool’s interactive maps, simulators, and recommended response strategies to develop watershed-specific plans that prevent ecosystems from being degraded beyond repair.
Specialists from Ohio, New York, Minnesota, Wisconsin, Michigan and Illinois-Indiana Sea Grant programs have spent the last few months testing the tool in broad range of communities and divers audiences. Planning groups from the industrialized southern Lake Michigan to the more preserved northern Wisconsin and Minnesota can now use the decision support system to kick off the watershed planning process. In Indiana, Ohio, and New York, facilitators have also introduced planning consultants and state employees to tool modules so they can take the process back to their own communities.
Experiences so far have been positive, with many users expressing excitement about the role Tipping Points and Indicators could play in improving watershed planning. Community members, local officials, and consultants were particularly interested in the tools’ recommended policies, ordinances, and outreach efforts tailored to local needs. In fact, a watershed advocacy group from the Duluth area mentioned they could have spent a whole day on that module alone. 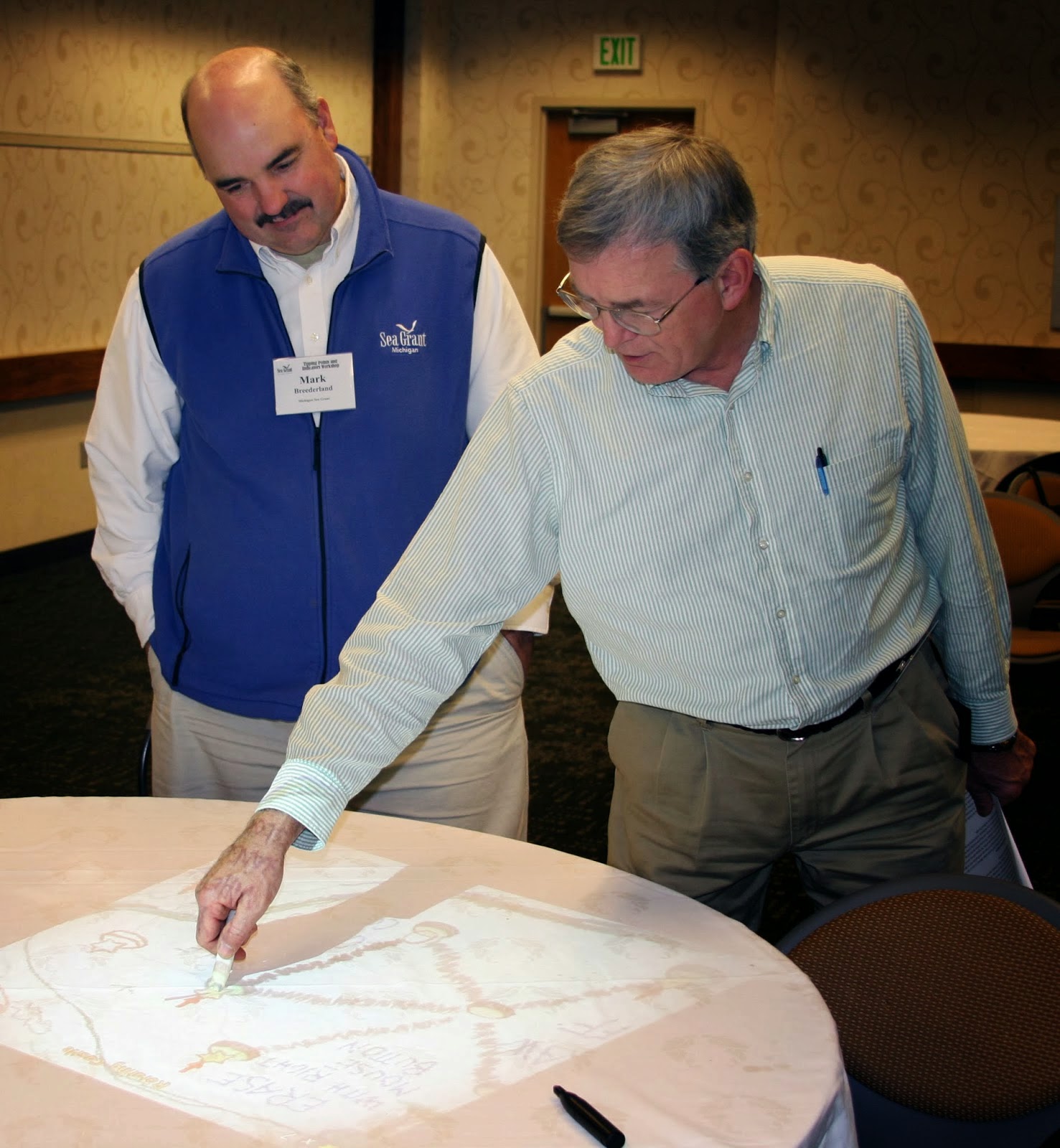 To further enhance the tool, users also recommended making maps and planning strategies more watershed-specific. Many of these refinements are being made now. Others, including the addition of the new land cover data and models that predict future tipping points, are expected in the coming months.
And as the project grows, so does the lead team. Last month, IISG brought Purdue software developer Brandon Beatty onboard to help boost the usability of Tipping Points and Indicators and ensure it continues to rely on the latest research and technology.
The tipping points tool is part of a four-year project funded by NOAA and EPA and coordinated by Illinois-Indiana Sea Grant. Partners include Purdue University, University of Michigan, Michigan State University, University of Minnesota Duluth, University of Windsor, Great Lakes Environmental Research Laboratory, the Cooperative Institute for Limnology and Ecosystem Research, the Great Lakes Restoration Initiative, and the Sea Grant Great Lakes Network. 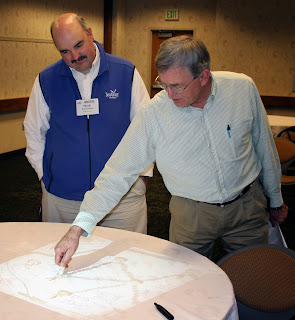 Staff members from six Great Lakes Sea Grant programs met at Purdue University last week to preview a new web-based tool that will help local planners make sustainable land use decisions. The two-day workshop gave Sea Grant specialists a chance to work through the tool’s four-step process and suggest changes before they start using it with planning groups and communities next spring.

The Tipping Points and Indicators tool uses watershed data and cutting-edge research to show planners where aquatic ecosystems in their region are stressed by various factors to the degree that they are in danger of crossing a “tipping point,” triggering rapid and sometimes irreversible shifts in their functioning. With help from a Sea Grant facilitator, planners can use the tool’s interactive maps and simulators to specify important regional priorities, pinpoint specific land use practices that threaten ecosystem health, and test how further development, restoration, or conservation projects would help or hurt. Together with suggested policies, ordinances, and outreach efforts, these features help planners develop watershed management plans that prevent ecosystems from being degraded beyond repair. 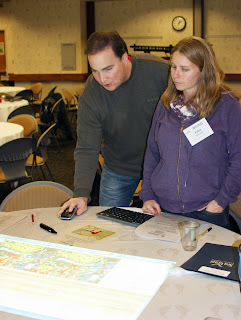 Future facilitators from Ohio, New York, Minnesota, Wisconsin, Michigan, and Illinois-Indiana Sea Grant programs worked in groups to build mock watershed management plans for rural, suburban, and urban watersheds. Hands-on activities helped participants get familiar with the tool’s features, as well as ways to customize the process to meet the needs of communities they work with. They also learned how to use and set up different technologies that help larger groups collaboratively use computer-based programs, including the weTable, which transforms a regular tabletop into an interactive computer screen.
Perhaps the most important result of the workshop, though, was a list of feature and design changes to further increase the usability of the tool. Many of the suggestions focused on making land use data more accessible for the residents who join non-profits and local agencies in watershed planning groups. These and other refinements, including the addition of new data, will be made in the coming months. 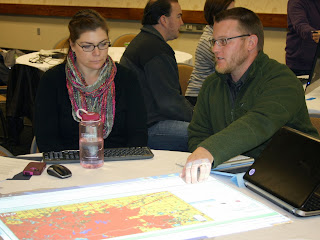 In the news: Great Lakes lawmakers consider a ban on harmful pavement sealant

November 14th, 2012 by Irene Miles
Coal-tar sealant, a commonly used application in parking lot and other pavements, is known to be harmful to humans, and threatens to enter watersheds and Great Lakes waterways as well. That is why lawmakers in three Great Lakes states are considering or proposing a ban on the substance in order to protect those waters.
From The Great Lakes Echo:

“Negative effects on fish and other aquatic animals include inhibited reproduction, fin erosion, liver abnormalities, cataracts and death, according to Geological Survey reports.
Coal-tar sealcoat makes up about half of the PAHs in lake sediment, according to Environmental Science and Technology. It is why PAH levels have increased in the sediment of urban and suburban lakes since 2000 even when other major PAH producers, like power plants, have been decreasing emissions.”

Read the complete story at the link above.

June 25th, 2012 by Irene Miles
A lot of people are probably familiar with the streams, lakes, and rivers near where they live. Many people might even be able to point out where their local water treatment plant is. But what a lot of people might not know is that the water we use often comes from a long, long way away. 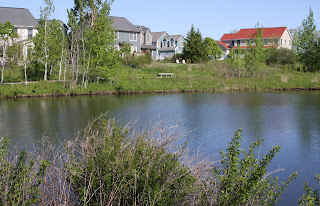 Watersheds are areas where water comes together and drains to a common place. In addition to the streams and rivers and creeks that we can see, though, watersheds encompass a huge range of pathways for water, and your nearby water supply might be part of a very large system that spans multiple states.

As a result, even in areas where there aren’t necessarily rivers nearby, what goes into our water directly or indirectly can have a big impact. Development and sprawl, even well outside of cities and away from rivers or lakes, can have a significant effect, and that is the focus of a recent article from The Atlantic Cities:

“Of course, obtaining sustainable development in town isn’t enough, in and of itself, to guarantee high quality, fishable and swimmable rivers and streams. Industry plays a part; utilities and waste water treatment plants play a part; sensitive farming, ranching, and/or timbering play a part, all in different proportions depending upon the particular watershed in question.”

The interconnectedness of watersheds is one of the main motivations behind initiatives like Lawn to Lake and Unwanted Medicines – keeping the bad stuff out of our water protects people, plants, and animals across a wide region.
Read the complete article to learn more about the connectedness of waterways and watersheds.