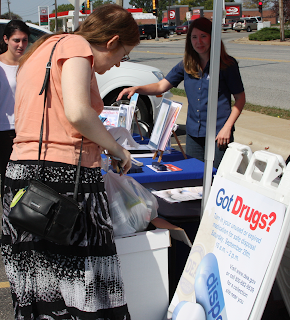 Thousands of residents in Illinois and Indiana came out last Saturday with the goal of ridding their homes of unwanted pharmaceuticals as part of the Drug Enforcement Administration’s (DEA) 5th annual National Prescription Drug Take-Back Day. From 10 a.m. to 2 p.m. police officers and volunteers in more than 200 locations in Illinois and 70 in Indiana collected bottles, boxes, and sometimes even garbage bags full of prescription and over-the-counter human and veterinary medications. Everything collected will be properly incinerated by the DEA.

IISG staffers were at two of these locations at Walgreens stores in Champaign and Urbana, joining local police officers and Walgreens representatives to collect medication, answer questions about the environmental effects of throwing away or flushing pharmaceuticals, and provide information on how to safely dispose of medications when collection events are not available. 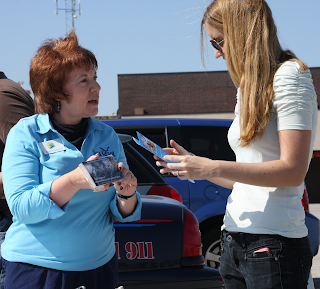 At both locations, people began lining up to hand over their medicine even before the event began. IISG volunteers heard from several people that they had been saving medications in anticipation of Saturday’s event. Take-back event regulars brought medications accumulated just since April’s DEA-sponsored event, but some brought pharmaceuticals with much older time stamps. One woman disposed of medicine she had been storing in her cabinet since 2005, and another brought in medication that was almost 20 years old. Exact figures on how many pounds of pharmaceuticals were collected during the 4-hour event won’t be announced by the DEA for several weeks, but police officers involved in the event described the day as on track to exceed previous take-back events. 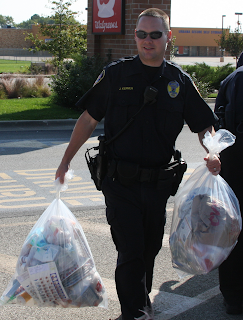 Single-day collection events like this are an important way to limit negative impacts to wildlife and local waterways from prescriptions and medications that are improperly disposed of. A wide-range of pharmaceutical chemicals has been found in rivers, groundwater, and drinking water throughout the country due to medications being flushed down the toilet or thrown in the trash. The impact of these chemicals on long-term human health is still unknown, but a connection between pharmaceutical-contaminated waters and impaired development, behavior, and reproduction has been found in many species of fish and other aquatic wildlife.

Ridding homes of unused medication can also help protect the elderly, children, and pets from accidental poisonings and reduce instances of prescription or over-the-counter drug abuse.

IISG has been educating people on pharmaceutical stewardship issues and helping communities establish safe and legal permanent medicine collection programs for more than six years. For additional information on how to dispose of medicine between take-back events or in areas where collections are not available, visit www.unwantedmeds.org.