My Rain Garden Walk: Trials and tribulations on the streets of Champaign 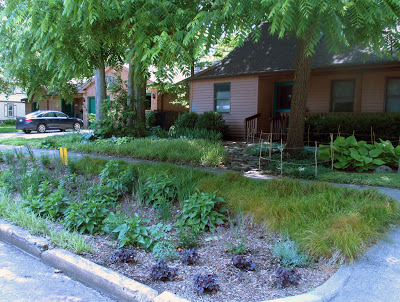 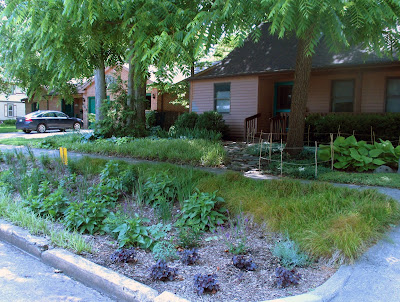 When Anna Barnes and David Riecks originally installed their rain garden in 2010 they knew it might take a little work, but they were in for more than they thought. Ranging from the uncontrollable to the unavoidable they had their fair share of trouble. But it was nothing they couldn’t handle.

The couple took the opportunity to build their rain garden when the City of Champaign was putting in new sewer drainage and a driveway for their neighbor. Along with their neighbor, they decided to build their garden in the lawn space along the side of the road, as the city was going to dig up the whole area.

The garden itself is made up of two basins. The lower basin is along the road and the upper is on the main property, the sidewalk separating the two. The lower basin contains a variety of flowering plants and grass-like plants. When in full bloom the garden contains lavender, daffodils, black-eyed Susans as well as obsidian heuchera and dwarf goldenrod. The basin is lined with Pennsylvania sedge and Ice Dance sedge. The sedge helps keep the soil in place as well as protects the garden from things such as too much snow build up and salt. The upper basin now has brunnera, Pennsylvania sedge, and ‘Ice Dance’ sedge that shares space with the walnut tree in the front yard. 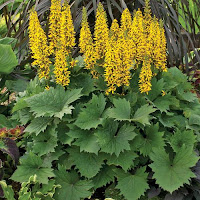 In the garden’s first years, it suffered from back to back droughts as well as a surprising foe, dogs. The upper basin originally had astilbe, ligularia, and osumnda. Not only were these plants unable to compete with trees roots, they were not drought proof either. Plants such as turtle heads, cardinal flowers, and ligularias in the lower basin could not survive with the extreme lack of water. Also, the garden did not thrive because their street is a popular path for dog walkers, so it was frequently urinated on. Dog urine contains chemicals that dry out plants and can lead to leaf burn. In addition, dogs walked through their garden, unintentionally damaging plants.

Barnes explained that too few people understand that a single perennial can cost as much as a bag of grass seed, and that some people believe dog urine is no more harmful than water. She added a sign in the garden warning of the dangers of dog urine on their plants asking people to curb their dogs.

This led to changes in the original garden layout. The plants that couldn’t survive were replaced and some plants were moved around to protect others. For example, the Ice Dance sedge is now along the road in the lower basin, replacing the Pennsylvania sedge. Barnes did this strategically in response to the amount of snow and salt the area is exposed to. Barnes noticed the snowplow that cleans her neighborhood tends to pile up excess snow, and therefore, salt as well, along part of her garden. This damaged the Pennsylvania sedge that was supposed to keep the soil together and protect other flowers in the garden. 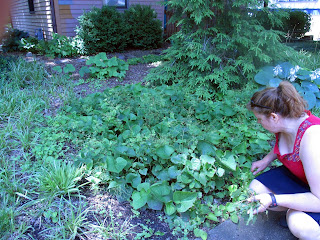 Barnes advice to homeowners who wished to start their own rain gardens, is that patience is key. “Really watch the site for a full year,” she said. She remembers that their landscape architect only saw the area of their potential garden in the fall, which heavily influenced the types of plants picked and their arrangement.

But these difficulties don’t discourage them. They look forward to watching their garden grow throughout the years.

“As time goes on it will look like a little prairie,” Barnes said.

They will have their little prairie in the midst of their city.